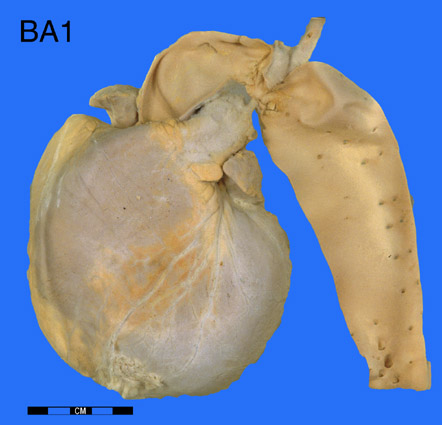 This patient was a 22 year old man known to have heart disease. He presented with a history that 12 weeks previously he had 2 teeth extracted, followed 2 weeks later by the onset of "sweats", for which he was placed on a course of Sulpha tablets for 4 weeks. There was no improvement so he was admitted to hospital and treated with penicillin. Examination revealed an afebrile man, with an absent pulse in the right arm, and a normal pulse in the left arm. The blood pressure in the left arm was 110/60. The pulse rate was 88 and regular. Systolic thrills were present over the carotid arteries. The apex beat was in the 6th left inter-costal space, 15 cm. from the mid-sternal line. There was a harsh blowing early systolic murmur, heard loudest in the aortic area. Slight pulsation of the inter-costal arteries was visible posteriorly. Hepatomegaly and slenomegaly were present. Blood culture grew Streptococcus viridans. Despite antibiotic treatment his condition deteriorated and he died.

The specimen is a heart and opened aorta, viewed from the anterior aspect. The heart is greatly enlarged and is globular in shape. There are focal pericardial adhesions near the apex on the anterior surface. There are 4 large arteries arising from the aortic arch. From left to right as viewed (i.e. from patient's right to patient's left), they are the right common carotid (replacing the R. innominate artery), the left common carotid, the left subclavian, and an aberrant right subclavian artery (the longer of the latter two vessels). Between the left common carotid and left subclavian arteries, there is a suture line where the aortic arch has been cut at autopsy and later re-joined for demonstration purposes. Immediately distal to the origin of the left subclavian artery, at the distal border of the arterial orifice, there is a marked narrowing of the lumen of the aorta to a diameter (unopened) of less than 5 mm. The narrowing is at the site of the ligamentum arteriosum (foetal ductus arteriosus). The origin of the aberrant right subclavian artery is situated immediately distal to the site of narrowing. It's lumen is about half the size of a normal subclavian artery. (The origin of the R. subclavian is seen as a slit-like opening in the wall of the aorta). This is a coarctation of the aorta. (The aberrant R. subclavian arises distal to the obstruction, hence the absent pulse in the R. arm). Immediately distal to the site of the co-arctation, there is intimal ulceration with adherent fibrin involving an area approximately 15 mm in diameter. There is mild dilatation of the aorta beyond the coarctation. This is known as post-stenotic dilatation. The aorta is otherwise normal. The posterior aspect of the specimen shows marked thickening of the left ventricular wall and interventricular septum and dilatation of both ventricular cavities. The atria have been removed. The visible remnants of the tricuspid and mitral valves appear normal. This is an example of coarctation of the aorta and aberrant origin of the right subclavian artery. Subacute bacterial endocarditis was present involving the aortic wall at and immediately distal to the site of the coarctation. (The term "endocarditis" is a misnomer at this site, but the pathological processes are the same. At autopsy, there was also a congenital aortic stenosis, (see rear of specimen) and infective endocarditis of the stenosed aortic valve. This is an example of congenital heart disease (aortic stenosis and co-arctation of the aorta) complicated by sub-acute bacterial and endocarditis.

Patients who develop symptoms in second or third decade from coarctation of the aorta have a poor prognosis. Only one quarter of them will live till the 4th decade. Death is due to bacterial endocarditis or cerebrovascular disease. Infants should be examined for coarctation by comparing the radial and femoral pulses. Early diagnosis and surgical intervention may prevent complications in later life.