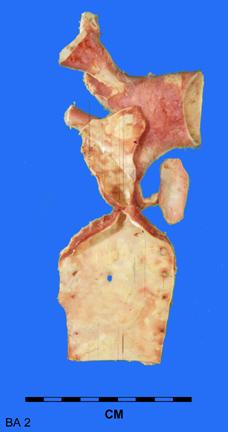 A man of 73 was admitted to hospital with cardiac failure and died following an episode of pulmonary oedema. Examination showed signs of severe left ventricular failure, weak femoral pulse and radiofemoral delay in the pulse wave. Post mortem also revealed extensive collateral circulation particularly via the internal mammary arteries. This may explain why the patient was asymptomatic until old age.

The aortic arch and proximal descending aorta have been opened to display a severe constriction just distal to the origin of the left subclavian artery in the region of the obliterated ductus arteriosus. The aorta shows prominent atherosclerosis proximal and distal to the constriction which is only about 2mm in diameter. This is an example of coarctation of the aorta.