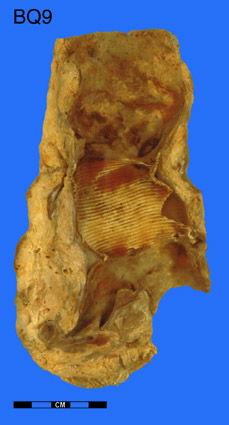 A thin 58 year old man with a long history of hypertension and smoking, was noted to have a pulsatile abdominal mass, for which he had elective surgery. He continued to smoke and two years later had a myocardial infarction and died.

The specimen displays the lower abdominal aorta and the common iliac arteries. A teflon graft replaces the aorta above the bifurcation which was the site of an atherosclerotic aneurism. Severe atherosclerosis affects the remaining aorta.