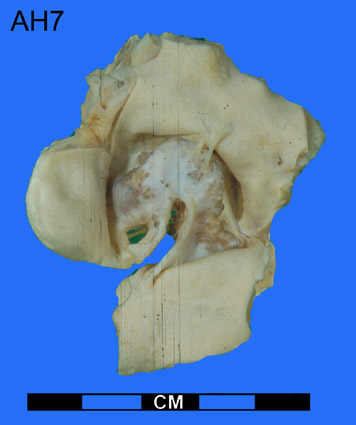 A man aged 83 with a history of shortness of breath for the past 18 months was admitted to hospital following several blackouts. Clinical examination revealed a cyanosed, dyspnoeic man, with a pulse rate of 94, blood pressure of 120/100 mm Hg, raised jugular venous pressure, an apex beat in the axilla and a to-and-fro murmur maximal in the 3rd inter-costal space at the left sternal border. Bilateral crepitations and pitting oedema were present. The patient died following admission.

The specimen is a dissected aortic valve mounted to display the superior surface. The valve cusps are fused and considerably thickened by irregular nodules of calcified material. A thin slit between two cusps allows communication between the left ventricle and the ascending aorta. A fenestration 0.5 cm in diameter is present in the cusp on the lower left of the specimen. This is an example of aortic stenosis.