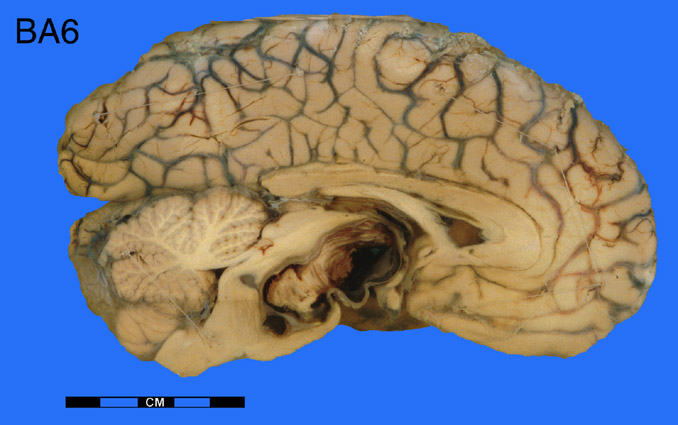 This brain has been sliced sagittally in the midline and has been mounted as two specimens. One comprises a whole hemisection of the brain while the other is a sagittal slice 1.5 cm thick. On the medial surface a large ovoid berry aneurism arising from the basilar artery and measuring 5 x 2 cm in diameter is seen. It has eroded up into the midbrain, compressing the third ventricle from below, and down into the substance of the pons. The wall of the aneurism appears intact although blood clot is seen in the third ventricle and appears to be leaking through the lateral wall of that ventricle. The aneurism is filled with laminated thrombus. In one specimen a small area of mucoid degeneration measuring 0.4 cm in diameter, is seen posterior to the aneurism within the pons. A more lateral sagittal section shows dilatation of the lateral ventricle, blood staining of the ventricular wall and patchy haemorrhagic infarction of the caudate nucleus. There is some discolouration at the meninges overlying the tip of the left temporal lobe and the cerebellum consistent with sub-arachnoid haemorrhage.