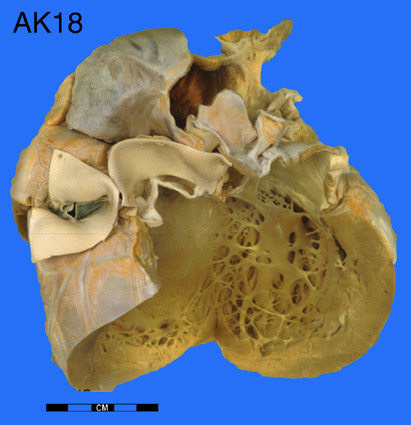 This 17 year old male was originally referred to this hospital with a "congenital heart". There were no symptoms apart from some dyspnoea on moderate exertion. Examination revealed an undersized boy with some cyanosis. BP 112/100 mm Hg in both arms. Pulse 120. Venous congestion was present in the neck and the apex beat was in the 6th left intercostal space 15 cm from the mid-sternal line. An apical systolic thrill was present together with a triple rhythm. A harsh systolic bruit was present at the apex with a diastolic component also. Hepatomegaly was present with leg oedema. Following investigation he was thought to be a possible case of sub-aortic stenosis and interventricular septal defect. Over the next 9 months there were several admissions for congestive failure and chest infections. During his final admission there was a steady deterioration and death.

Specimen is of a large heart with the left ventricle laid open on its anterior surface and pointing anteriorly is the aortic valve. On the right is the mitral valve, the cusp nearest the aortic valve having been turned back. On the left is the pulmonary artery and above this the distended right atrium and right arterial appendage. The aortic valve shows almost complete fusion of two cusps. This form of bicuspid valve is often referred to as congenital but this is not certain. The left ventricle is hypertrophied and dilated. The endocardium shows some patchy thickening. The mitral and pulmonary valves appear normal. The right ventricular wall is also hypertrophied. The pericardium shows several old fibrous patches over the lateral aspect of the left ventricle and thickening over the right atrium. (The PDA is not seen in the specimen).