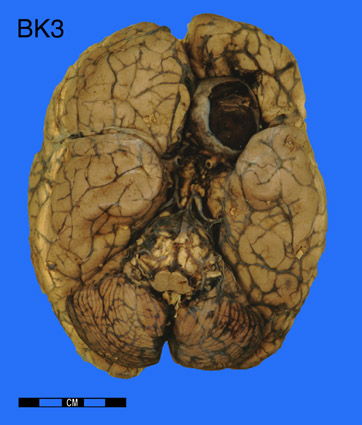 A 50 year old hypertensive man had an "apoplectic attack" while jogging. He was dead on arrival at hospital.

The brain has been sliced in the horizontal plane and mounted to display the basal surface on one side and the cut surface on the other. At the origin of the anterior and middle cerebral arteries there is an aneurism measuring approx. 4 cm in diameter. The aneurism has been opened to display the lumen, which is filled with laminated thrombus. There is patchy subarachnoid haemorrhage on the basal surface of the brain. Adjacent to the aneurism there is a tear in the inferior aspect of the frontal lobe, where the burst aneurism ruptured into the brain tissue. Examination of the cut surface of the brain reveals haemorrhage in the lateral ventricles and posterior horns due to rupture of the aneurism through the frontal lobe into the ventricular system. On the basal surface of the brain, there is grooving of the cerebellar tonsils caused by the raised intra-cranial pressure, which has compressed the infero-medial parts of the cerebellum against the edge of the foramen magnum. This is a ruptured cerebral aneurism, with subarachnoid, intra-cerebral and intra-ventriular haemorrhages.