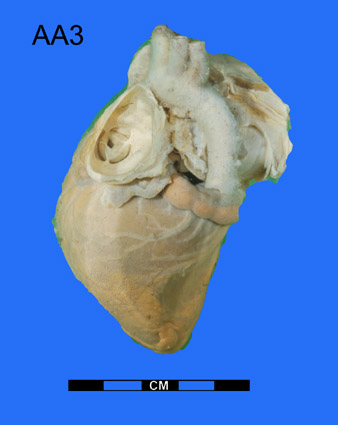 This male child had a cardiac murmur which was discovered at birth. He remained well until the age of 10 months. Two weeks before admission to hospital, he became languid, developed a slight cough, and suddenly gained a lot of weight. Ten days before admission he developed swelling of the hands, feet and face. On examination, he was a chubby child with a blood pressure of 90/59. There was a fine thrill over the whole precordium, and a harsh systolic murmur maximal in the pulmonary area. There was oedema of the face and legs. After admission there was further weight gain, and no response to therapy. Death was due to congestive cardiac failure.

The child's heart is viewed from the left side and the pulmonary artery has been opened to display the upper surface of the pulmonary valve. This abnormal valve consists of a thickened conical diaphragm with an opening 2 mm in diameter at the apex. The opened pulmonary artery has a large post-stenotic dilatation. There is right-sided cardiac enlargement due to marked dilatation of the right atrium and right auricle, and right ventricular hypertrophy. This is a pure pulmonary valve stenosis.

Pulmonary stenosis represents about 7% of congenital heart disease. It may occur as an isolated defect or as part of a more complex lesion, such as Fallot's tetralogy. The post-stenotic dilatation is due to jet-stream injury of the artery wall. Abnormalities similar to this specimen can now be corrected surgically.