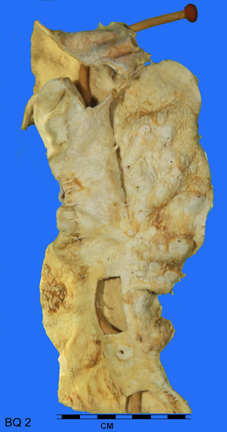 This dissecting aneurism was found in a 76 year old man who died from cerebral haemorrhage.

The specimen includes aortic arch, thoracic and abdominal aorta. The probe passes down the true aortic lumen, overlying which is the false channel of an old dissecting aneurism. The false channel has been opened and is lined by an atheromatous intima. Intercostal arteries are seen to arise from it. The dissecting aneurism communicates with the aortic arch by a split seen at the top of the specimen, and in life, blood re-entered the vascular system proper by a further intimal split in one of the common iliac arteries.