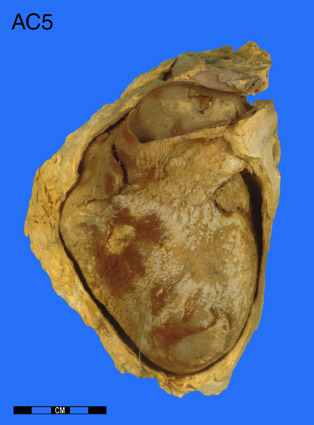 A man of 59 died with carcinoma of the bronchus and pneumonia.

In this specimen of the heart and adjacent structures, the parietal pericardium has been cut away to display the visceral pericardium which is covered by a thick shaggy layer of fibrinous exudate, giving the "bread and butter" appearance described by Laennec. It can be seen that the heart is enlarged and there are plaques of atheroma on the intima of the ascending and transverse aorta. Lymph nodes to the right of the trachea contain carbon pigment and pale tissue which may be secondary carcinoma. White material in the lymph node in the hilum of the left lung is probably old tuberculous caseation.