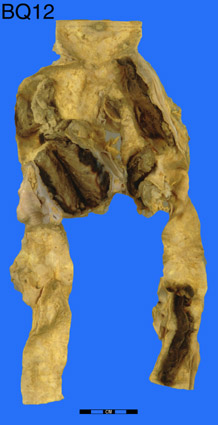 The specimen consists of aortic bifurcation, both common iliac vessels, internal and external iliacs and both femoral arteries. All vessels have been opened from behind to display their luminal surface and all show a moderate degree of atheromatous change superimposed on arteriosclerosis. The most striking abnormality is the presence of a large saccular aneurism at the origin of the left internal iliac artery. The aneurism is filled with old laminated thrombus. There is asymmetric dilatation of the right common iliac artery and the dilated region is filled with mural thrombus showing the characteristic "lines of Zahn" on its surface. A 10 cm length of adherent thrombus is seen in the right femoral artery.