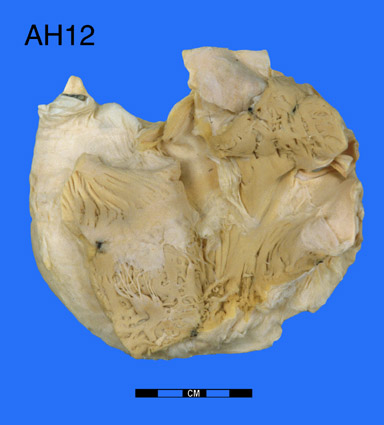 This 57 year old female was admitted with malaise and fatigue together with "fibrositis" in the joints for 6 weeks. There was swelling and reddening of the joints on the evening prior to admission associated with sudden left hypochondrial pain. Examination revealed a temperature of 38.4_C and right and left basal effusions. There was cardiomegaly and a systolic bruit at the apex, and questionable systolic and diastolic bruits along the left border of the sternum. Subacute bacterial endocarditis was suspected. Investigations were not definitive; the patient during this time became jaundiced. Cortisone therapy was started with some improvement. The patient was discharged and re-admitted 2 1/2 months later, dying 3 days following admission. At this stage a mass had become palpable in the epigastrium.

The specimen is of a heart laid open to display the left ventricle and associated valves. There is some slight thickening of several chordae associated with the mitral valve. Several have adherent thrombi up to 4 mm in diameter. Both mitral and aortic valves are slightly thickened. Some atheromatous deposits are present above the aortic valve cusps. Apart from the above the specimen is relatively normal. This is a poor example of a Libman-Sacks endocarditis. Microscopy revealed wire-looping of the glomeruli.