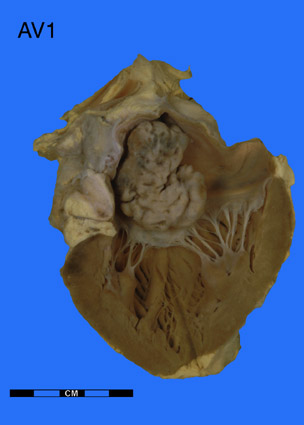 Admission - 12 July 1962. Died - 11 October 1962. This 23 year old male had a history of:1. Right mid-thigh amputation for osteogenic sarcoma of the tibia 3 years prior to the final admission. admission; 2. Local excision of a single metastasis in the left upper lobe in April 1961; and3. Total left pneumonectomy in February 1962 for regrowth of the metastasis. The patient was followed in the Outpatient Department and developed firm tender nodules on the tips of the fingers and thumb of the left hand which steadily increased in size. He was admitted for cytotoxic drugs. On examination, multiple lumps were present on fingers of left hand and on chest, thigh and left buttock. Cytotoxic drugs were given with little improvement. Despite direct transfusions, the patient deteriorated and died, there being a rapid increase in the size of the digital tumour nodules prior to death.

The specimen is of a heart sliced open to display atrial and ventricular cavities with intervening mitral valve. Attached via a narrow pedicle to the region of foramen ovale is a buff coloured nodular mass 4.5 x 4 x 2 cm in size. The surface shows a small amount of haemorrhage and a curiously pitted appearance. Fibrous adhesions are present on a thickened visceral pericardial layer.

This mass proved to be a mass of antemorten clot in which sarcoma cells were embedded. There were also areas of necrosis.