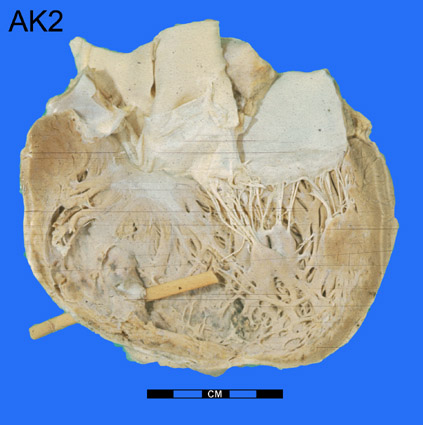 The patient was an 81 year old man with a history of hypertension. Two weeks before admission he developed persistent central chest pain not relieved by rest but relieved by analgesics. Electrocardiogram at this time showed evidence of ischaemia. Six days before admission there was an exacerbation of the chest pain, associated with tachycardia, hypotension and the development of a systolic murmur and thrill. ECG showed recent infarction. On admission there was a persistent systolic murmur, maximal at the lower end of the sternum, and ECG changes consistent with anterior infarction. The patient died suddenly seven days later.

The heart has been opened and mounted to display the left ventricle. Superiorly, adjacent to the aortic root and mitral valve ring there is hypertrophy of the wall of the ventricle; however from the mid-ventricular level, extending downwards to the apex of the heart, the wall of the ventricle is markedly narrowed and fibrotic. These changes are more severe anteriorly and at the apex than in the posterior wall. A subendocardial pale necrotic zone is visible in the narrowed part of the wall, partly delineated by a narrow haemorrhagic border. This necrotic zone is most obvious in the anterior wall, but is also visible at the apex and in the posterior wall. A ragged tear 1 cm. in length is present in the interventricular septum. A probe has been passed through the defect into the right ventricle. A patch of mural thrombus is adherent to the septum close to the apex, and patchy sub-endocardial haemorrhage and fibrin deposition are seen in the anterior wall near the tear. At autopsy there was thrombosis of the anterior descending branch of the left coronary artery. This is an example of old and superimposed recent myocardial infarction complicated by rupture of the interventricular septum.