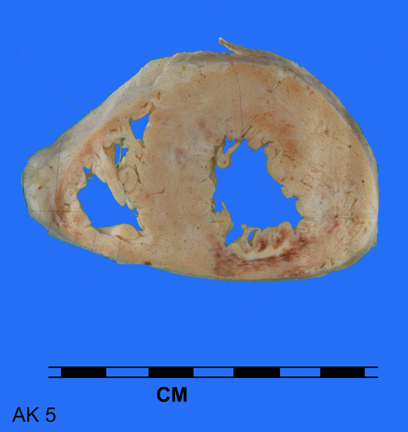 This 32 year old man had a history of angina pectoris for the past two and a half years. One week before admission to hospital he was woken at 4 a.m. by severe central chest pain. He rested in bed for 2-3 days, after which the pain came on only with exertion, i.e. after walking about 15 metres. On examination at this time, the blood pressure was 130/90, and physical examination was normal. Electrocardiogram showed evidence of inferior infarction. Serum transaminase levels were normal, however serum cholesterol was 6.3 mmol/L. The patient was treated with anticoagulants, but eleven days after admission, the chest pain recurred and he died suddenly six hours later.

The heart has been sliced transversely and mounted to display a cross-section of both ventricles near the apex. The ventricles are viewed from below. In the posterior wall of the left ventricle there is a narrow pale zone of subendocardial necrosis 2 cm in length, which is surrounded by an irregular hyperaemic zone. There are two small irregular white fibrotic areas in the anterior part of the interventricular septum, due to previous sub-endocardial ischaemia. At autopsy a recent thrombus was found in the right coronary artery and in the circumflex branch of the left coronary artery. This is an example of a myocardial infarct of approximately two and a half weeks duration.

Infarcts less than 6-12 hours old are usually not visible macroscopically.