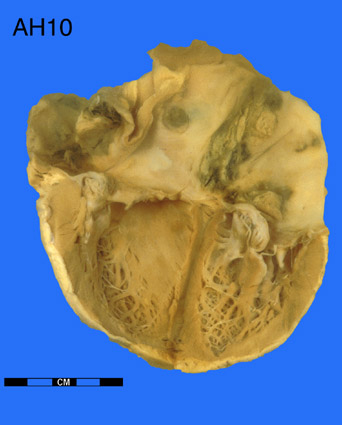 The patient was a 52 year old female with increasing dyspnoea. She gave a past history of fever with flitting joint pains in childhood following a sore throat. On examination: cyanotic, pulse showed atrial fibrillation, JVP elevated, pansystolic murmur at apex, hepatomegaly, and dependent oedema. She was treated with digoxin, lasix and penicillin but died after cardiac arrest.

The specimen is that of a heart opened to show the left atrium and left ventricle. The mitral valve has been cut but the parts thereof which are visible show extensive thickening. The left atrial wall shows deposition of blood and fibrin. The left auricular appendage is filled with blood clot. The blood clot in this appendage is a consequence of the atrial fibrillation and the mural thrombus on the atrial wall is in the typical site-MacCallum's patch.