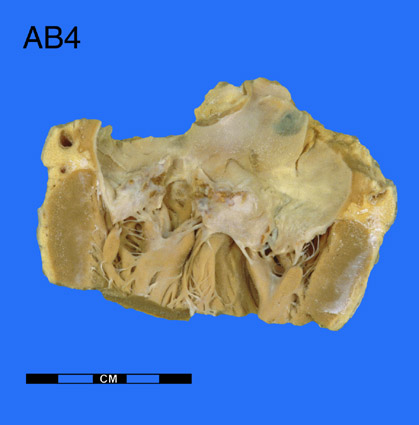 This 38 year old female originally presented with a history of shortness of breath for 9 years. She had been able to cope with her household tasks and a pregnancy up until that time. Nine months before presentation her face, abdomen and ankles began to swell and she noticed a flush in her cheeks that had not been there previously. This time, effort dyspnoea became more marked. She was examined and found to have mitral valve stenosis. Mitral valvotomy was performed and was followed by a stormy convalescence. She was re-admitted later in congestive failure and died

The specimen is a portion of the heart sliced open to display the mitral valve. The valve is thick and calcified and the chordae are thickened and contracted. Two leaflets are fused but there is a split in the anterior leaflet extending the whole thickness of the valve and a smaller split in the posterior leaflet. Both these splits are associated with deficiencies in the related papillary muscles. The left ventricular wall is 10 mm thick and the sectioned coronary arteries appear normal. Pericardium shows the presence of dense adhesions. This is a post-operative specimen of mitral stenosis.