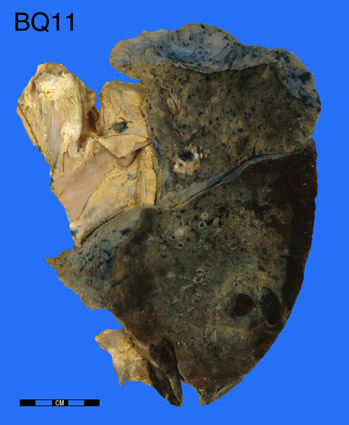 This 67 year old woman with a past history of hypertension and myocardial infarction presented to hospital with a 10 day history of L. hemiphorresis and a 5 day history of constipation and lower abdominal pain. On examination a L. hemiplegia was confirmed and she was found to be in congestive cardiac failure. Her failure was treated and she initially improved. 22 days after admission she developed respiratory distress and died.

The specimen comprises trachea, descending thoracic aorta and left lung. The left lung has been sectioned longitudinally and has been mounted to display the cut surface. The endothelial surface of the aorta reveals changes consistent with moderate atherosclerotic disease. In the lower part of the descending thoracic aorta the lateral wall has ruptured. The resulting defect measures approximately 5 cm longitudinally and is filled with degenerate atheromatous material and blood clot. Bleeding has occurred into the lung substance and blood clot is seen on the cut surface of the left lung. The wedge shaped haemorrhagic area at the apex of the L.L. lobe probably does not represent a true haemorrhagic infarct but blood staining 2_ to haemorrhage into the lung from the aorta. For blood to have collected in this region the patient must have been lying down at the time of haemorrhage.