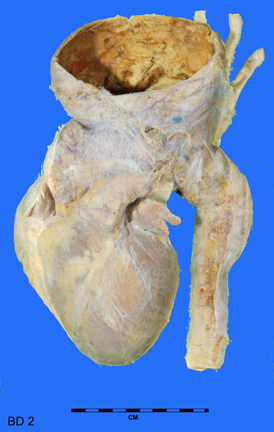 This 61 year old man presented with a 6-year history of shortness of breath. Three years previously there had been the onset of anginal pain on exertion which had become increasingly severe and frequent. His admission was precipitated by a severe exacerbation of these symptoms. When examined, there was central cyanosis, a pulse rate of 106, collapsing in nature, and a blood pressure of 110/50. The right hand side of the neck was swollen, with pulsation and a palpable thrill over the carotid artery. A heaving impulse was present in the 2nd and 3rd right inter-costal spaces and a systolic thrill was also palpable. The apex beat was in the 6th left intercostal space, 13 cm. from mid-sternal line. A loud systolic and diastolic murmur was heard over the 2nd and 3rd interspaces on the left hand side of the sternum. Chest x-rays showed a "large rounded lesion in the right upper mediastinum continuous with the heart shadow. The aortic arch and descending aorta are visible and these are only a little larger than normal. Slight generalised cardiac enlargement is also present." Wassermann reaction was strongly positive. The patient's condition deteriorated over several days and died.

The specimen is a greatly enlarged heart mounted in continuity with the arch of the aorta and the first part of the thoracic aorta. The ascending aorta is dilated up to 7 cm. in diameter and is expanded superiorly by a large aneurysmal bulge 11 x 13 cm. in diameter which has been opened to display the wrinkled scarred intimal surface. There is also marked atheroma of the intima. The innominate, left common carotid and sub-clavian arteries at the right upper corner of the specimen have been displaced towards the (patients) left by the aneurism. On the internal surface of the aneurism there is a ridge-like thickening 5 mm high. This is the site of attachment of the pericardial sac externally. There is marked congestion of small blood vessels in the adventitia of the aorta. This is a syphilitic aneurism of the arch of the aorta. See Note, BD1.