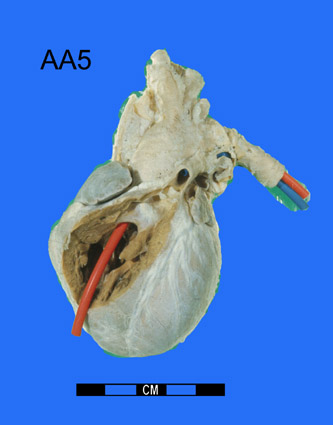 A 21 month old boy was admitted with a history of exhaustion and exertional dyspnoea for the previous 2 to 3 months. During this time there had been several attacks of acute dyspnoea each lasting up to two minutes. Examination revealed central cyanosis, mild finger clubbing and a harsh ansystolic bruit maximal at the left sternal edge. Cardiac catheterisation led to a diagnosis of Fallot's tetralogy and severe pulmonary oedema. A surgical correction was performed (Willis-Potts anastomosis between aorta and the origin of the left pulmonary artery). The child developed acute dyspnoea and left lobar consolidation 12 hours post-operatively and died despite treatment.

The child's heart is viewed from the anterior aspect. The anterior wall of the right ventricle has been excised to reveal prominent right ventricular hypertrophy and a narrowed pulmonary outflow tract. The pulmonary valve ring is also small, with a bicuspid stenosed valve. There is a patch of endocardial fibrosis in the outflow tract below the pulmonary valve. The origin of the aorta overlies a high ventricular septal defect. The red probe passes into the aorta from the hypertrophied right ventricle. The blue probe passes from the narrowed pulmonary trunk into a dilated, thin-walled left pulmonary artery and through the surgical anastomosis into the descending aorta. Examination of the back of the specimen reveals an opened right atrium and left ventricle. When viewed from the right side of the heart, there is a large atrial septal defect 8 mm in diameter at the site of the foramen ovale. Another tiny ASD 3 mm in diameter is present posterior to the upper border of the large ASD. Note that the wall of the left ventricle is slightly thinner than the wall of the right ventricle.

The four features of tetralogy of Fallot are:1. ventricular septal defect (VSD)2. an aorta which straddles the VSD and communicates with both ventricles (over-riding aorta)3. pulmonary stenosis or obstruction of the right ventricular overflow tract4. right ventricular hypertrophy. This condition usually causes cyanosis early in life. Its severity depends on the degree of pulmonary outflow obstruction, which determines whether there is a left-to-right, or right-to-left shunt. In some patients, pulmonary blood flow is increased due to the presence of a patent ductus arteriosus. Patients with this condition may survive untreated into adult life, and a few may reach middle age. However, surgical correction is now possible and is desirable as the disorder is ultimately fatal. Sometimes additional cardiac abnormalities may be present. (e.g. atrial septal defect, as was found in this case).