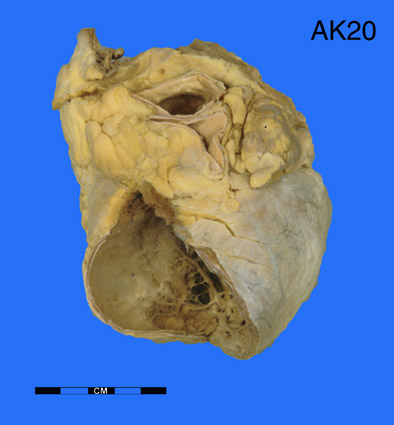 This 74 year old female was admitted to the Alfred Hospital for management of metastatic breast carcinoma. She was known to have coronary artery and peripheral vascular disease and two previous myocardial infarctions several years previously. On admission she looked anorexic and was obviously unwell. Her blood pressure measured 180/100 mm Hg and she had a regular pulse rate of 90/minute. Cardiovascular examination was reported as being unremarkable. Other findings included left breast skin tethering, left axillary lymphadenopathy and a right pleural effusion. Despite recurrent draining of her pleural effusion it recollected and she eventually died one month after admission due to a combination of the effects of metastatic breast carcinoma, combined with respiratory insufficiency and recent bilateral pulmonary thrombo-embolism.

The anterior left ventricle of an enlarged globular heart has been sliced open to display a large aneurism. The wall measures only 2 to 3 mm in thickness in some places and is formed of dense pale fibrous tissue. No associated mural thrombus is present.