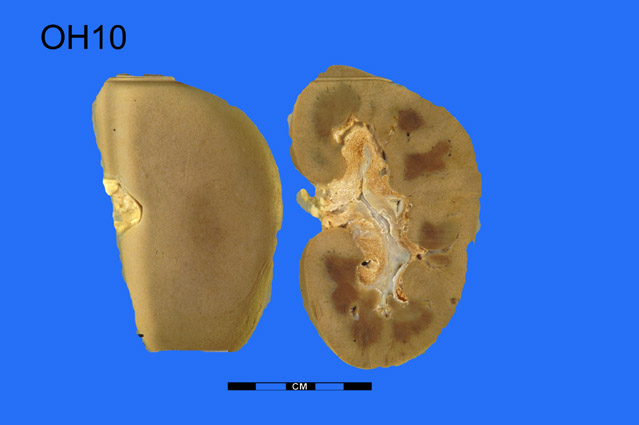 This 30 year old male presented with a story that one month previously he had suffered from a sore throat. A week later, the throat became sore again and lymph nodes in his neck were swollen. 12 days prior to admission, he noticed oliguria and oedema of the hands and face with dyspnoea a slight cough. Protein was found in the urine at this stage. When examined here, the patient was cyanosed, the blood pressure was 170/130 and pulse rate 144 and regular. He was sweating and there were rapid, laboured respirations. Many moist sounds were heard in the chest. There were bilateral pleural effusions and oedema of the hands and back. Urine specific gravity was 1024 and albumin was present. The ESR was 20 mm/hour, haemoglobin 12.1 gm/dl and leukocyte count 25 x 109/l with a shift to the left. Serum electrolytes were sodium 145, potassium 6.5, chloride 112 and bicarbonate 10 mmol/L. The blood urea was elevated. Despite treatment, the patient's condition deteriorated and he died 2 days after admission.

The specimen includes two enlarged, bisected kidneys, each 10 cm in length. They have been sliced in their long axes and mounted to display the external and cut surfaces. The remnant of capsule present at the hilum is of normal thickness and the capsular surface is smooth. The kidneys appear swollen and slightly paler than normal. The cut surface shows a pale cortex of slightly increased width, a congested medulla and distinct cortico-medullary differentiation. The pelvic mucosa is normal. Histologically, this kidney showed the changes of acute diffuse proliferative glomerulonephritis. At necropsy, bronchopneumonia was also present.