Carcinoma of The Penis 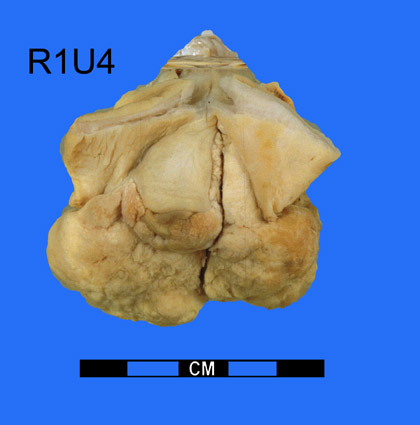 This 83 year old male presented with a 5 year history of a lump on the foreskin which 2 years prior to presentation had ulcerated, and 6 months later had begun to increase in size. On examination, there was a large ulcer 5 cm in diameter involving the glans and the prepuce. The urethra was not involved. Inguinal glands were bilaterally enlarged. Amputation of the penis was performed and post-operative recovery was satisfactory.

The specimen is the distal 6 cm of the penis. The prepuce has been opened and folded back to display the ventral aspect of the glans. The urethra has been opened on the ventral aspect. A pale fungating tumour up to 6 cm in diameter has arisen from the glans and has infiltrated through the dorsal part of the prepuce. The surface of the tumour has a nodular appearance and there is patchy necrosis and haemorrhage. The tumour projects up to 25 mm beyond the distal margin of the prepuce. Histology confirmed that the tumour was a squamous cell carcinoma of the penis.