Embryonal Carcinoma of The Testis 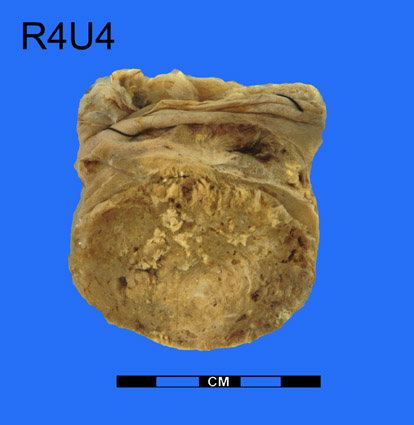 This 23 year old man presented with a 10 week old history of right sided testicular swelling associated with mild tenderness. Groin examination revealed a swollen, moderately tender reddened right testicle which was not fluctuant and not transilluminable. Abdominal and general physical examination was otherwise normal. Initial investigations included estimation of alpha-foetoprotein, which was greater than 60 micrograms per litre (normal 4), and human chorionic gonadotrophin, was 100 micrograms per litre (normal 2).

The specimen is an enlarged testis 6 cm in maximum diameter. The testis has been completely replaced by a mass of tumour tissue containing numerous small irregular foci of necrosis and haemorrahge, and focal fibrosis. (Necrotic foci are pale yellow in colour). Histology revealed an embryonal carcinoma with foci of syncytiotrophoblastic differentiation. The cells in these areas showed strong positivity on immunoperoxidase staining for human chorionic gonadotrophin.

The classification of testicular tumours is controversial, however, the most widely accepted and easily understood version is probably that of the World Health Organisation. Under this classification, embryonal carcinoma is one of the pure (i.e. not mixed) germ cell tumours. Whereas seminoma is a germ cell tumour which represents gonadal differentiation, embryonal carcinoma may be regarded as a tumour of totipotential stem cells. Embryonal carcinoma occurs most often in the 20-30 year age group, and is approximately 20% of testicular tumours. It is more aggressive than the typical seminoma, and has a worse prognosis.