Carcinoma of Head of Pancreas 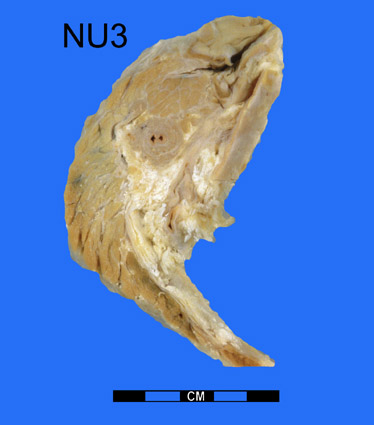 This 58 year old female presented with a story that ten weeks previously, she had had a cholecystectomy for cell stones. Discovery of the stones had been preceded by a nine month history of aching upper abdominal pain and weight loss. Following the operation, the patient felt better and gained weight but two weeks prior to admission, she began to vomit two or three times a day. The vomiting was not related to meals. On examination, the patient was pale and afebrile and there was little to find apart from an aneurism of the abdominal aorta. She died suddenly in the ward.

The specimen is a portion of the pancreas, sliced horizontally in its long axis and mounted to display the cut surface. A portion of aortic wall is adherent posteriorly (on the upper right hand side of the specimen), and anterior to the aorta there is the splenic artery and vein. On the upper aspect of the specimen there is a small piece of duodenal mucosa. The pancreatic tissue between the splenic artery and duodenum has an abnormal lobulated appearance consisting of a pale brown tissue separated by thin white fibrous strands. Similar tissue is arranged in a roughly concentric fashion around the artery. The abnormal nature of this tissue, which has extensively infiltrated the head of the pancreas, is more obvious on viewing the back of the specimen. Microscopically, this was a carcinoma of the head of the pancreas. Metastases were found in the liver and in the duodenal-jejunal flexure, the latter resulting in a high intestinal obstruction.