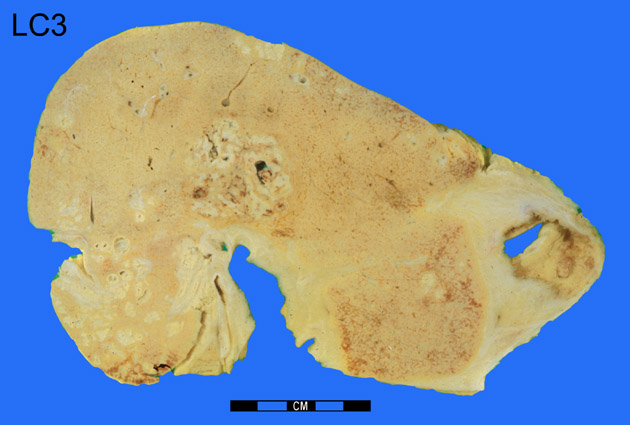 A 53 year old man became jaundiced one month after resection of a carcinoma of the caecum. The jaundice was relieved by a cholecystostomy but the patient's condition steadily deteriorated over the next 2 years and he died.

The liver has been sliced and mounted to display the cut surface. The inferior aspect is uppermost. The capsule is thickened and there are fibrous adhesions inferiorly. Centrally in the liver tissue, there is an irregular rounded pale lesion 35 mm in diameter formed by multiple confluent small abscesses. Also present, mainly localised to a subcapsular zone in the infero-lateral region, are multiple small yellow-stained lesions 2 to 6 mm in diameter. These are probably dilated small bile ducts, some of which are empty and some of which are filled with whitish material, probably pus. The yellow colour is due to bile staining. Some of the affected ducts have been destroyed and replaced by tiny abscesses. This is an example of suppurative cholangitis with abscess formation.