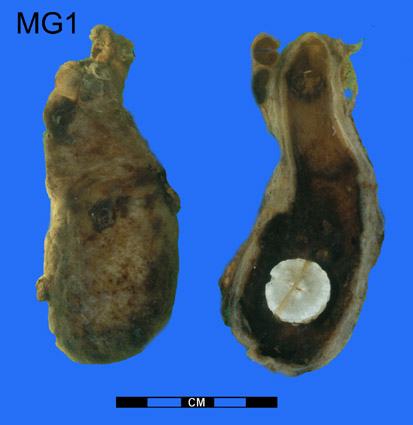 A woman of 52 with intermittent dyspepsia for 16 years developed severe pain in the right hypochondrium with radiation to the shoulder and back. At the same time she became jaundiced and her urine darkened. A month later, following further attacks of pain, a cholecystectomy was performed.

A gall bladder 10 cm in length has been opened to display the mucosal surface. The mucosa is thickened, congested and focally ulcerated. The wall is considerably thickened by fibrosis, the thickness varying from 4 to 9 mm. A solitary cholesterol calculus is present in the latter. Histology revealed acute inflammatory changes superimposed on chronic cholecystitis.