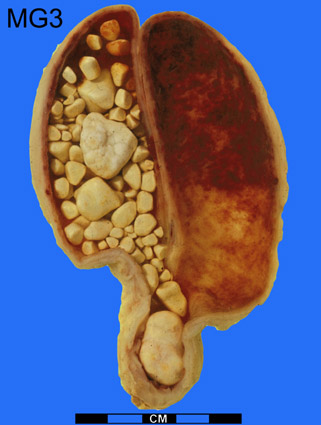 A 60 year old man had a history of four episodes of severe gripping abdominal pain during the previous year, each lasting two hours. He presented with a similar attack associated with vomiting and fever. This last attack did not resolve spontaneously and he underwent surgery.

A thick walled gall bladder has been opened to display a thickened haemorrhagic mucosa and many irregular faceted calculi. A large calculus is impacted in the neck of the gall bladder. The serosal surface of the gall bladder is congested and has lost its normal sheen. This is an example of cholecystitis with cholelithiasis.