Antidepressants – a death trap for our fish

While antidepressants may keep humans happy they are detrimental to our fish population, according to new international research led by Monash University biologists.

The research published in Environment Pollution and led by PhD student Jake Martin from the Monash Faculty of Science, has found that Fluoxetine – a common form of antidepressants –  adversely affects the behaviour of fish and impedes their responses to potential predators. 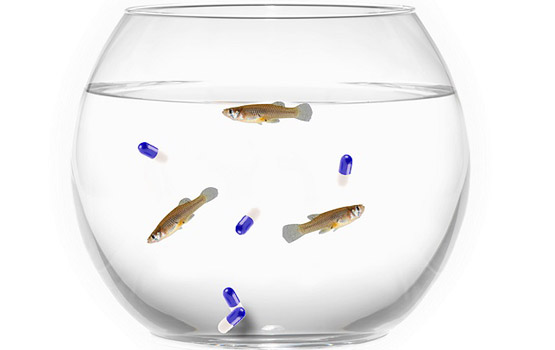 The research is significant because it has found that changes in the behaviour of fish occurs at very low exposure concentrations of Fluoxetine that are often detected in our waterways.

“For example we found that Mosquitofish exposed to Fluoxetine are more active and actually venture quicker into the vicinity of dragonfly nymphs, which are a common aquatic predator of small fish,” said Mr Martin.

“And the escape response of the fish is also compromised,” he said.

Fluoxetine-exposed fish reduced their ‘freezing’ behaviour – a common strategy used by fish to avoid detection by a predator – following a simulated predator strike.

“Our research shows that such behavioural shifts can make Fluoxetine-exposed fish more vulnerable to being captured and eaten,” Mr Martin said.

The findings highlight the wider issue of environmental contamination by human and veterinary pharmaceuticals that end up in waterways because of ineffective removal through wastewater treatment processes.

“Hundreds of pharmaceutical products have been detected in the environment and their impacts on wildlife and ecosystems are still poorly understood”.

The article in Environment Pollution can be found here.