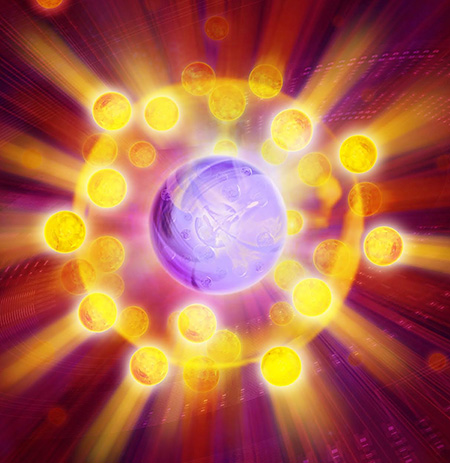 Groundbreaking international research involving Monash physicists has observed, for the first time, the formation of quasiparticles in real time. The research, published today in Science, is globally significant and has major implications for the electronics industries.

When an electron moves in a solid, it produces a polarisation due to its electrical charge. This ‘polarisation cloud’ moves along with the electron, and together these can theoretically be described as an independent quasiparticle.

“It’s like a skier in powder snow," said Professor Rudolf Grimm, who led the experimental investigation at the University of Innsbruck in Austria. "The skier is enveloped by a cloud of snow crystals. Together they form a system with different properties than the skier without the snow cloud.”

However, measuring the formation of quasiparticles in solids represents a major challenge.

"These processes take place in the attosecond range and their time-resolved observation is extremely difficult,” said Professor Grimm, whose team instead uses ultracold quantum gases to investigate complex quantum systems. "We simulate the same physical processes at a much lower density. The emergence of quasiparticles lasts a few microseconds.”

Ultracold quantum gases are an ideal testing ground to study physical phenomena that occur in solid-state materials and other states of matter, such as neutron stars. In such gases, quantum states of many particles can be engineered and the interaction between the particles precisely manipulated.

“It can help us to better understand ultrafast quantum processes which can ultimately be harnessed in a new generation of electronic devices.”

The researchers were financially supported by the Austrian Science Fund FWF as part of the special research FoQuS and Doctoral Programs atoms, molecules and light (ALM).