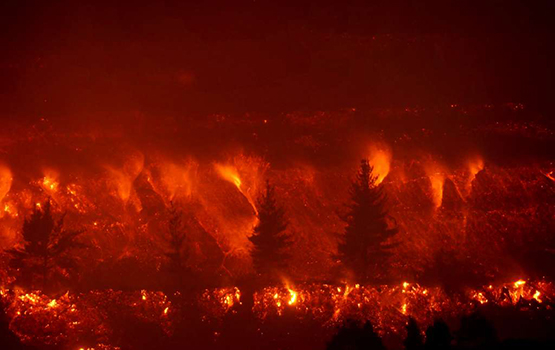 Children living in zones impacted by the Hazelwood mine fire and smoke event reported increased levels of anxiety, trouble concentrating at school and experienced traumatic dreams.

On 9 February 2014, the open-cut brown coal mine servicing the Hazelwood power station in the Latrobe Valley caught fire due to nearby bushfires. The coal mine fire burned for 45 days, covering Morwell and other communities across the Latrobe Valley with smoke and ash.

Children living in zones impacted by the Hazelwood mine fire and smoke event reported increased levels of anxiety, trouble concentrating at home and school, and had traumatic dreams of similar events recurring, a Monash University study has found.

On the other hand, children also reported a boost in their relationships and group activities shared with family members, saying they provided a useful distraction and coping mechanism from lingering effects of the smoke.

The study also found fewer children reported a continuation of negative symptoms by the time of the interview, almost two years later, with some indicating the event strengthened their resilience and gave them greater preparedness for future similar events. Others expressed concern about the long-term health implications of smoke inhalation.

Researchers interviewed 69 children aged between 8 and 16 years. Participants were from grades 3, 5, 7 and 9 from seven schools in Morwell and one school in Traralgon. The data is based on the first collection phase which occurred in late 2015.

The study showed the response of schools, family members and the community to the smoke event affected the social, emotional and academic wellbeing of some children – while others experienced little from the event.

The prestigious Child & Youth Care Forum published the findings of this study titled: ‘Children’s Perspectives on the Impact of the Hazelwood Mine Fire and Subsequent Smoke Event’. Professor Darryl Maybery and Dr Matthew Carroll from Monash Rural Health ran the Hazelwood Schools Study.

Dr Emily Berger from Monash University’s Faculty of Education led the analysis of the interview data on which this paper draws.

“Children also reflected on the prolonged and uncertain nature of the event and recalled questioning how long the event would continue and what the health implications would be for them and their families,” Dr Berger said.

“Whether or not it was safe to spend time outside was frequently mentioned by the children, as well as concerns about a lack of information about the event and available support and respite for the community.”

Key findings of the study included:

Dr Berger said children indicated they should have been better informed about the event and bushfires in general. This would have assisted them to cope better with its impacts and enable them to support their peers during this time.

“While it appears that relocation to another school may have reduced psychological distress among children because they were moved away from the fire and smoke, it also impacted learning and academic progress due to reduced attendance and disruption to usual routines,” she said.

However, exposure to this incident and other critical events may have also increased the resilience of children and their capacity to respond to trauma, according to Dr Berger.

“While loss of sleep and frustration about the event increased family arguments, many children reported improved relationships with parents and siblings, through more time spent at home engaging in family-oriented activities.”

Dr Carroll, lead of the Hazelwood Psychological Impacts stream, added: “This study illustrates how important insights from children and adults, in response to trauma, can be integrated into future disaster preparation, response and rehabilitation strategies.

“It is particularly important to consider the impacts of prior events like the Hazelwood mine fire when looking at how the community coped with the major fires over last summer and how they are coping now during the COVID-19 pandemic with the associated impacts of remote schooling and other restrictions.”

The Victorian Department of Health and Human Services funded the research, as part of the broader Hazelwood Health Study. This paper presents the views of the authors and not the Department.