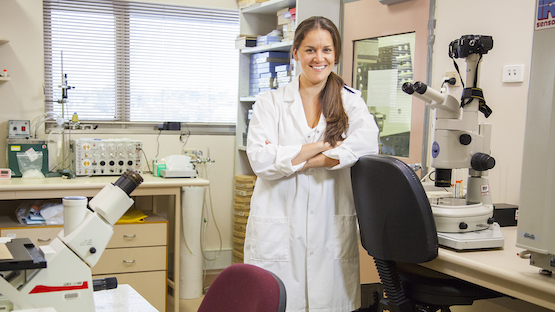 A baby’s growth during pregnancy may be dependent on its mother’s levels of a critical nutrient, creatine, according to research from a team of Melbourne researchers.

A research team from Monash and Hudson Institute (the Ritchie Centre) have shown the links between a mother’s creatine levels during pregnancy and her baby’s size at birth, in a paper published in the British Journal of Obstetrics and Gynaecology on August 23.

The finding has prompted a world-first study of 900 pregnant women at Monash Health, to determine optimum creatine levels during pregnancy.

Dr Hayley Dickinson, Head of the Embryology and Placental Biology Research Group at the Ritchie Centre (Hudson Institute and Monash University) and lead researcher said the discovery is a major breakthrough for understanding the importance of maternal diet and its impact on an unborn baby’s growth.

“Our study shows for the first time that a mother’s creatine levels affect the growth of her baby in the womb,” said Dr Dickinson.

Creatine is essential for our cells’ energy generation and supply. Half our daily creatine requirement comes from fish, meat and dairy products. The other half is made by the body from the amino acids arginine, glycine and methionine.

“These are incredibly exciting results and raise the possibility that improvements in maternal diet, or supplementation with creatine, could protect a baby from poor growth, brain injury and, in the most severe cases, even death,” Dr Dickinson said.

In the study of 270 women, the team found that pregnant woman who had less creatine in their urine, gave birth to significantly smaller babies.

The next step is the study of 900 pregnant women, which will track changes in maternal creatine levels throughout the length of pregnancy.

The findings may inform development of new dietary guidelines, including a minimum recommended creatine intake during pregnancy.

“We believe a woman’s need for creatine increases during pregnancy and, if this can’t be met by her normal diet, a simple creatine supplement could be used to support her health and the health of her baby before and even after birth.

“It’s early days though, we aren’t ready to recommend that women start taking creatine supplements. We just don’t know enough yet. It’s vital for both mothers and babies that we get this right, it’s not something that can be rushed”, Dr Dickinson said.

“This is completely new ground. Our focus is on finding safe and potentially beneficial levels of creatine during pregnancy.” Dr Dickinson said.

“In the meantime, it’s a reminder that a balanced diet is crucial during pregnancy.”