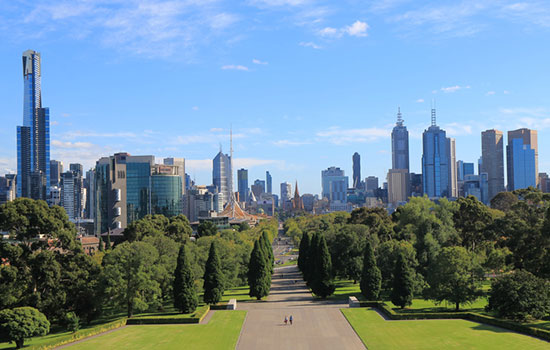 By Diego Ramirez-Lovering, Head of the Department of Architecture

Melbourne has been repeatedly awarded the accolade of world’s most liveable city. This is no doubt due in large part to the excellent public domain Melbourne offers. Its parks and leafy suburbs provide green amenity, and the city has great public programs through its libraries, cultural buildings and an ongoing calendar of events.

However, Melbourne is growing rapidly in a way that threatens this overall liveability.

The density of existing suburbs is increasing largely through the uncoordinated development of small “mum-and-dad” developer-builders that replace one house with two or three. This ad-hoc development pattern is eroding the amenity and character of the suburbs. For instance, established tree canopies and gardens are gradually being lost, to be replaced by concreted areas.

At the same time, large housing developments are being built on newly subdivided land on Melbourne’s fringe. These often lack essential services as well as public and cultural spaces and programs.

The combination of these development approaches is threatening overall city liveability.

Debates in our city about housing futures, including themes of affordability, sustainability and resilience, are increasingly considering wider notions of amenity and services. It is important to shift the tenor of this discussion further. This requires that issues of public space and public domain be placed at the centre of debate and action.

While still foregrounding housing as a basic human right and a central element in city-building, these bodies are looking to provide expanded solutions for increasing populations and urbanisation. Their focus is on public space, amenity, essential service provision and mobility.

This broadening of the debate was evident at the recent 20-yearly Habitat III conference I attended in Quito, Ecuador. Two important shifts from previous housing-focused directions were noticeable.

The first difference was the conference themes. Housing themes were intertwined with themes around essential services and public space as an essential combination for successful city-making.

As a conference observer-participant, it was fascinating to watch a wide range of presentations by organisations from all over the world maintain a sustained focus on the importance of public space, public domain and amenity.

The shared vision of the New Urban Agenda adopted at Habitat III illustrates this:

We envisage cities and human settlements that … are participatory, promote civic engagement, engender a sense of belonging and ownership among all their inhabitants, prioritise safe, inclusive, accessible, green and quality public spaces, friendly for families …

A notable feature of the Habitat III conference was the sustained focus on public space, public domain and amenity. Guillermo Granja/Reuters

The second interesting shift was the inclusion of developed cities and states into the debate and action. Previously, there had been a strong focus on developing countries and slum revitalisation and reduction.

It was acknowledged that the impacts of activities and actions in one country, whether planned or otherwise, go beyond jurisdictional boundaries. This was made clear, for instance, in conversations about climate change and urban development. Activities involving countries such as China, India or the US may have an impact not only at the national level but also on the globalised economy.

What are the local lessons?

Locally, we can take some cues from these international shifts toward more inclusive urban agendas. In Melbourne, the city faces ongoing growth in high-density living, with apartments and subdivisions rapidly rising across the city. It is imperative to understand why public and cultural spaces, as well as quality amenity and services are vital to our city’s success.

We must also recognise that we need to design our homes and other spaces in the larger-scale context of the city.

Rather than looking at developments in isolation, we need to consider their connection with the whole environment and in relation to a range of pertinent issues. These include population growth, climate change, changing family demographics and resource limitations. We need to design for long-term sustainability rather than short-term gain.

In addition to increasing our focus on integrated models locally, it is important to become more active across international boundaries in our region, particularly in Southeast Asia. Projects being developed at Monash University focus on adapting local knowledge and expertise in integrated urban models to the slum contexts of Indonesia and Fiji.

By helping to create sustainable and resilient city-making processes in our region, we can contribute to a global debate and action.