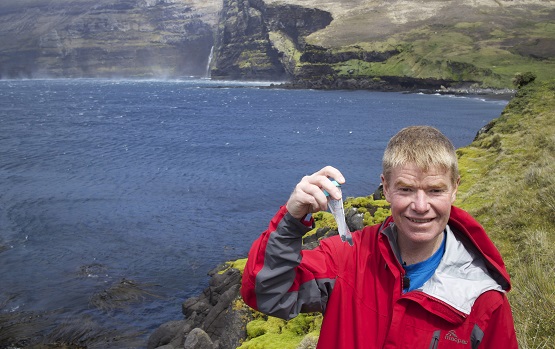 Professor Steven Chown, internationally-renowned ecologist and biologist from Monash University’s Faculty of Science, has today been recognised by the French Government for his extensive environmental research and policy contributions on Antarctica.

The French Foreign Ministry, representing the host country of the 43rd Antarctic Treaty Consultative Meeting, will bestow upon Professor Chown the inaugural Medal of the 30th Anniversary of the Madrid Protocol to the Antarctic Treaty. He will be presented with the medal on 15 June.

The award recognises outstanding contribution in a number of science fields including, environmental changes in Antarctica and the Southern Ocean, and legislation studies that aim to reinforce the Madrid Protocol.

The award was open to all researchers from the 41 countries that have ratified the Madrid Protocol, including Australia, United Kingdom, USA, Japan, China and Germany.

France, which initiated The Antarctic Treaty System, worked alongside Australia in 1989 to drive international negotiations that led to the signing of the Madrid Protocol in October 1991.

The Treaty designates Antarctica as “a natural reserve, devoted to peace and science”, and has set principles for framing human activities in the area for the overall environmental protection of the content.

“This award is further recognition of the quality of our people addressing these fundamental issues, and I congratulate Professor Chown on this remarkable and well-deserved achievement.

Professor Chown has delivered unique insights into the biodiversity and ecology of the region, shown how these are threatened by human impacts, and delivered, through rigorous evidence, a means to mitigate these impacts.

Professor Chown is Director of Securing Antarctica’s Environmental Future, a Special Research Initiative of the Australian Research Council, hosted by Monash University. He is also an Objective leader of Revitalising Informal Settlements and their Environments, a Wellcome Trust-funded program to improve the livelihoods of at-risk people in the Asia-Pacific.

Professor Chown's major contribution has been the Chair of the International Scientific Committee on Antarctic Research (SCAR) for the past four years. His leadership has been instrumental in advancing the commitment of the SCAR communities to better understand Antarctic environmental change and associated ecosystem impacts.

Last year, Professor Chown was one of just 37 individuals from across the world elected as an Honorary International Member of the prestigious American Academy of Arts & Sciences.

He has long been active at the meetings of the Antarctic Treaty System to ensure that scientific evidence finds its way into policy and practice through clear, timely and focused communication.

“I'm deeply honoured to be the recipient of this medal which recognises simultaneously the contribution of science to the Antarctic Treaty's deliberations, and the significant role of France in the development of the Environmental Protocol,” Professor Chown said.

“Science forms the foundation for our presence in Antarctica, and for the means to see to its long-term conservation. I'm overwhelmed to have my scientific contributions recognised by France on this 30th Anniversary of the Madrid Protocol which formalises international efforts to conserve the region.

“At a time when environmental pressures, both local and global, are threatening the conservation of the Antarctic and its unique ecosystems, appreciation of science to support conservation efforts is most welcome. I am indebted to the French Republic for selecting my contributions for such recognition.

“This extraordinary recognition by the French Republic belongs also to the many researchers, policymakers, colleagues and friends with whom I have had the pleasure to work.”