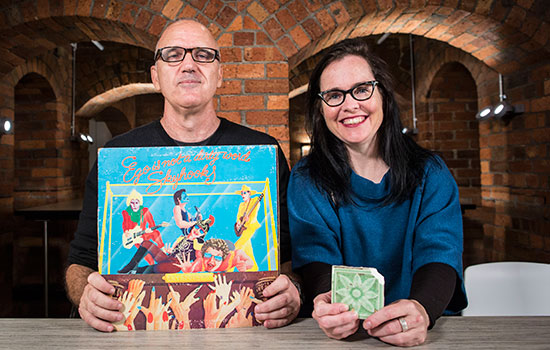 Lovers of Melbourne’s music scene will have the chance to become part of history at a special event that aims to capture five decades of memories and memorabilia under a joint Monash University and RMIT University project.

As part of their research, Monash Associate Professor Shane Homan and RMIT’s Dr Catherine Strong are holding a fan event day on Saturday 25 February 10am-6pm at the Melbourne Town Hall where all music lovers are invited to bring along their favourite piece of memorabilia and speak to the research team about what the item means to them.

Music experts Bruce Milne and Dobe Newton will also be on hand to speak to fans and share their insights. Fans’ memories will be preserved as audio recordings and their items photographed as part of the project.

Associate Professor Homan said he was looking forward to seeing people’s contributions, saying they would provide a significant historical and cultural source.

“This will be the first time Melbourne’s music scene will be documented through the eyes of fans and industry players going back 50 years, and promises to provide some fascinating memorabilia.

“These will be preserved in an online archive recording the experiences of fans, musicians and industry players that can be accessed by the music community, researchers and policy makers,” Associate Professor Homan said.

“This is a unique opportunity for fans to be a part of making history,” RMIT researcher Dr Catherine Strong said.

“Archival, interview and fan material will be documented on the project website and in a book published on Melbourne pop and rock histories.”

The fan event day is part of a wider three- year Australian Research Council grant project, Interrogating the Music City: the Cultural Economy of Melbourne. It will document the emergence and development of popular music in Melbourne, and its contribution to the city’s economy and culture from the 1950s through to the present.

“As governments around the world increasingly look to music cultures as drivers of economic development, it is important to reflect on Melbourne’s status as a music city,” Associate Professor Homan said.

The material will also form part of wider State Government and City of Melbourne processes of curation and collection of memorabilia and memories.

People can register for Retro Recall: Rock and Pop in Melbourne here

“Growing up in Sydney, Skyhooks helped make sense of Melbourne as a city, through songwriter Greg Macainsh’s evocative lyrics about Melbourne suburbia. I bought this album as a 12-year-old in 1976, and it helped enormously to starting watching them on Countdown in the mid-1970s. Apart from being colourful, their lyrics were of course very adult to a young teenager!

Dr Strong said her item was a tile from inside the Palace Theatre, also known as the Metro for a long time.

“The Palace was a very popular Melbourne venue, and I saw lots of great gigs there - it was particularly good for short people like me because it had multiple levels so it was one place I could go and actually see the bands! The beautiful old decorations from the start of last century were ripped out and destroyed by the new owners in 2015, and I was lucky enough to get my hands on this one.”