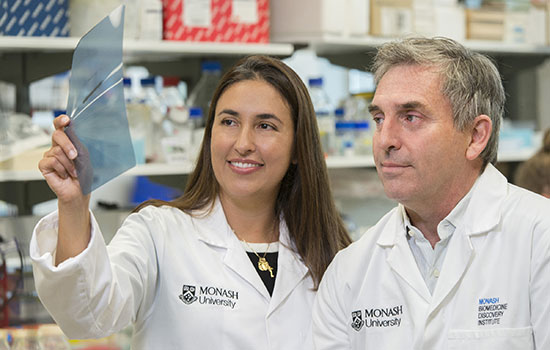 Monash University’s Biomedicine Discovery Institute researchers have led an international study that found – for the first time – that a diet yielding high amounts of the short-chain fatty acids acetate and butyrate provided a beneficial effect on the immune system and protected against type 1 or juvenile diabetes.

The specialised diet developed by CSIRO and refined by Monash University researchers uses resistant starches – found in many foods including fruit and vegetables – that resist digestion and pass through to the colon or large bowel where they are broken down by microbiota (gut bacteria). This process of fermentation produces acetate and butyrate which, when combined, provided protection against type 1 diabetes.

“The Western diet affects our gut microbiota and the production of these short-chain fatty acids,” researcher Dr Eliana Mariño said.

“We found this had an enormous impact on the development of type 1 diabetes in diabetes prone mice”, she said.

The findings, which attracted considerable interest at the International Congress of Immunology in Melbourne last year, were published today in the prestigious journal Nature Immunology.

Professor Charles Mackay, who instigated the research and was senior author on the paper, said the study highlighted how non-pharmaceutical approaches including special diets and gut bacteria could treat or prevent autoimmune diseases such as type 1 diabetes.

“The findings illustrate the dawn of a new era in treating human disease with medicinal foods,” Professor Mackay said.

“The materials we used are something you can digest that is comprised of natural products – resistant starches are a normal part of our diet.

“The diets we used are highly efficient at releasing beneficial metabolites. I would describe them as an extreme superfood,” he said.

Professor Mackay said that the diet was not just about eating vegetables or high-fibre foods but involved special food and a special process, and would need to be managed by nutritionists, dietitians and clinicians.

He said the results from the study were promising in that they showed that modulation of the microbiome through specialized dietary interventions can offer protection from type 1 diabetes.

“The key next steps will be to understand, through proper clinical studies, how these results might be translated to patients at-risk or living with type 1 diabetes to prevent or delay progression."

The researchers are hoping to gain funding to take these findings in mice, into human type 1 diabetes clinical trials.

This research was supported by the JDRF, the Diabetes Australia Research Trust and the Australian National Health and Medical Research Council.