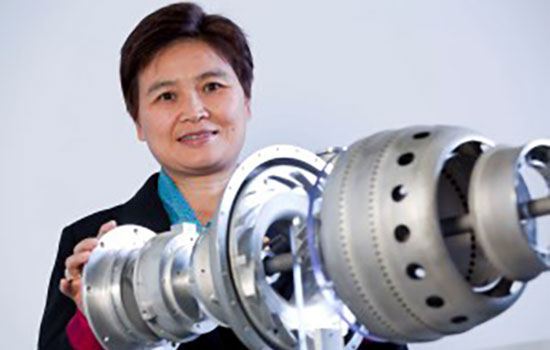 The biggest powder bed 3D printed metal aerospace component is on display at the Melbourne International Airshow at Avalon.

Monash University has commissioned the world’s largest metal printer, and has used it to print a large door hinge from a Chinese jet airliner. The aluminium hinge weighs 11 kg and is 40 by 80 by 39 cm in size. It is the largest powder bed 3D printed metal aerospace component printed to date.

The $3.5 million Xline 2000R printer acquired by Monash University is one of five made to date by German manufacturer Concept Laser. It’s the only one outside America and Europe, the only one based in a university and the only one in the southern hemisphere available for contract manufacturing.

“The new printer allows us to make large complex shapes and unique tools quicker, lighter and with less waste,” says Professor Xinhua Wu who leads the Monash 3D printing initiative. There are several types of 3D printing. The powder bed approach uses a laser moving across a base plate to fuse fine coatings of metal powder, one layer at a time, to gradually build an object.

Monash University and spin-off company Amaero Engineering demonstrated their mastery of additive manufacturing in metal at the 2015 Airshow when they presented the world’s first printed jet engine.

Since then, Amaero has operated as the commercial arm of the 3D printing initiative. “This new printer creates promising opportunities for advanced manufacturing in Australia for global markets,” says Amaero CEO Barrie Finnin. “Last year, we printed production components that are now flying in passenger jets and small turbojet engines. Our technology is also now operating in our manufacturing facility in Toulouse with our partner Safran - the French-based global aerospace and defence company.”

“Now we can literally go bigger. This new capability will be of great interest to our aerospace and automotive customers in Europe, North America, Asia and Australia,” Barry says.

The Amaero team are presenting a range of printed components for inspection on their stand at the Airshow, including

The development and commercialisation of this advanced 3D metal printing technology has been supported by Monash University; Safran; and the Australian Government through the Entrepreneur’s Programme; the ARC; and other agencies. CSIRO and Deakin University were also participants in the original engine printing project supported by SIEF which continues to provide valuable data and software tools.

Find out more about Amaero: http://www.amaero.com.au/