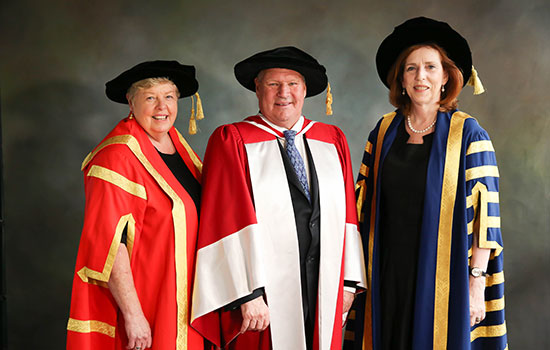 The Right Honourable the Lord Mayor of Melbourne, Robert Doyle, has received Monash University’s highest award today with an honorary doctorate from Monash.

The honorary degree of Doctor of Laws, honoris causa, was conferred on the Lord Mayor at a ceremony at Clayton campus.

The award recognises his distinguished career in public life, charitable and industry associations and promotion of Melbourne as a knowledge capital both nationally and internationally.

A Monash graduate, the Lord Mayor was made a Fellow of the University in 2010. Serving as Lord Mayor since 2007, he was a member of Victoria’s Parliament for 14 years, and Leader of the Liberal Party in opposition for four years. The Lord Mayor also contributes his time across a number of charity and industry groups.

“Robert Doyle has made a significant contribution to public life and public policy through his wide variety of influencing roles,” Professor Gardner said.

“I am delighted to bestow this honorary degree on a Monash graduate whose passionate dedication to building the Melbourne community and its national and international impact has made him a worthy recipient of our University’s highest honour.”

An honorary degree is the highest award the University can offer and is only conferred upon a small group of exceptionally distinguished individuals each year.