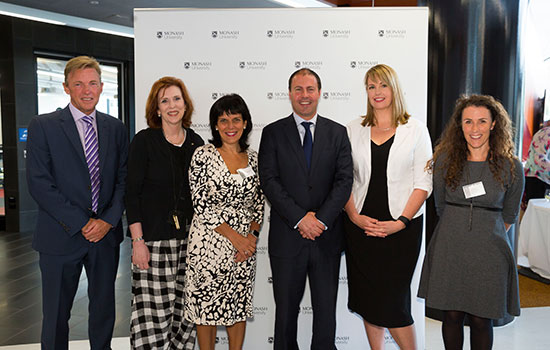 A global charitable foundation has awarded an AUD $14 million grant to an international research consortium led by Monash University. The announcement was made today by the Hon. Josh Frydenberg MP, Minister for the Environment and Energy.

In one of only four such successes selected from over 600 applications worldwide, the Wellcome Trust (UK) awarded the prestigious grant to the Monash-led team for a research project that will potentially improve the lives of the more than a billion people living in urban slums globally.

Part of the Wellcome Trust’s ‘Our Planet Our Health’ funding program, Monash will use the grant for a five-year research project (RISE) that will significantly advance human health and well-being in slums – or informal settlements – by transforming water infrastructure, water management, and sanitation practices.

The research project will deliver the first ever public health and environmental data on the outcomes of an alternative water management approach. The outcomes could potentially provide the basis for new water infrastructure policies and investment strategies for urban informal settlements worldwide.

The research, which will focus on informal settlements in Fiji and Indonesia, will commence this year. It will also be integrated in those countries in two infrastructure projects, which are currently being prepared for financing by the Manila-based Asian Development Bank.

The two infrastructure projects will upgrade 24 settlements in Fiji and Indonesia, chosen because they represent typical challenges to providing water management in the Asia-Pacific region. The new practices and approaches developed there could be replicated elsewhere in the world to transform health and livelihoods of people in informal communities.

The research will build on lessons learned from the successful water management programs pioneered by Monash and the Cooperative Research Centre for Water Sensitive Cities in Melbourne, China, Israel, and Singapore.

“Rapid urbanisation and the effects of climate change have a devastating effect on people around the world who live without adequate access to the most vital requirement for a healthy, stable and prosperous community – clean water,” Professor Gardner said.

“Monash already has a strong reputation for leading major, multidisciplinary, international research projects which have the ability to transform lives. Through our work, we have become recognised as a world leader in urban water research, influencing policy, regulation and practice.

“Our agility in bringing together teams of exceptional researchers across disciplines as diverse as medicine, design and economics both within our own University and across partner institutions and industries, positions us perfectly to lead this major global consortium. I am delighted that the Wellcome Trust and the Asian Development Bank are part of this important work,” Professor Gardner said.

The revitalisation work at each urban informal settlement will be designed through a community consultation process, and introduce a range of site-specific initiatives to deliver safe water and a healthy environment, such as:

Project team members include engineers, sociologists, architects, economists, public health experts and biologists from both Monash and partner institutions including Stanford and Emory Universities in the United States and the University of Melbourne.

Professor Brown explained the context for this research project, which will apply the Water Sensitive Cities model successfully used in a number of developed cities to urban informal settlements in Asia-Pacific:

“Currently 2.3 billion people globally lack basic sanitation and more than one billion of those are living in urban informal settlements” Professor Brown said.

“Access to clean water and sanitation is crucial and we know the centralised, energy-intensive ‘Big Pipe’ solution used for the past 150 years to pump water from reservoirs into cities, and sewage to centralised treatment plants, often overlooks informal settlements. This has led to avoidable health and social issues such as diarrhoea killing 760,000 children per year,” Professor Brown said. “But by ensuring safer, more reliable water supplies and wastewater disposal, our goal is first and foremost to reduce exposure of communities to environmental faecal contamination.”

Professors Brown and Wong were part of a Monash team that pioneered the Water Sensitive Cities concept, which has a decentralised, site-specific focus, combining green technological innovations and urban design. Initiatives include strategies like biofiltration gardens and stormwater harvesting, complemented by deep sociological, governance and economic insights.

Professor Wong explained how the Water Sensitive Cities approach will be used to reassess settlements in Fiji and Indonesia, and generate the first comprehensive evidence on how to successfully facilitate and implement the approach for informal settlements.

“Members of our consortium have already pioneered integrated, decentralised, and innovative programs to improve water delivery systems in Australia, China, Israel, and Singapore. Building on the work that the CRC for Water Sensitive Cities has been doing with the Asian Development Bank through their Future Cities Program, we are now applying those advances to informal settlements in Fiji and Indonesia,” Professor Wong said.

“In contrast to the centralised method, each neighbourhood will be involved in a community co-design process where tailored infrastructure solutions suitable to the local context can be introduced to harvest stormwater, recycle wastewater, manage sewage and protect against flooding.

“The project will evaluate wider impacts, including improved health outcomes, increased food production and employment, and decreased violence against women and girls, who will no longer have to travel long distances to find clean water or access toilets will be evaluated. The aim is to provide the basis for new long-term infrastructure policies and investment strategies for informal settlements.”

Dr Sarah Molton, lead for ‘Our Planet, Our Health’ at Wellcome, said:

“The health challenges faced by the billion people living in informal settlements cannot be overstressed, and it’s only going to get worse with increasing environmental change. This exciting and ambitious research partnership between Wellcome and Monash University aims to provide a solution by harnessing the natural landscape, and considering both the health, economic and ecological impact of water infrastructure.

“The project is a fantastic example of truly collaborative working, involving multiple disciplines and a forward thinking approach to future funding with the Asian Development Bank.”

Dr Bambang Susantono, Vice President (Knowledge Management and Sustainable Development) of the Asian Development Bank, said that ADB was delighted that Monash will be able to provide groundbreaking research on water and sanitation:

“Living without clean water and toilets means that families live with the daily threat of disease, or worse. Sickness stops children going to school and parents working, contributing to the cycle of poverty in city slums,” Dr Susantono said.

“With Asian cities growing at 120,000 people per day, and many ending up in slums, we urgently need new solutions for delivering water and sanitation in ADB operations. This research should provide proof-of-concept of new water sensitive approaches to slum revitalisation where large, centralised urban systems or dispersed rural services aren’t the most appropriate.”

The first six months of the five-year research project will be focused on developing local partnerships with the communities involved to design the urban dwellings and local environment.