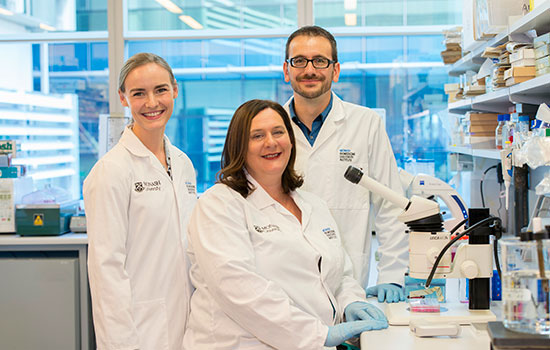 Monash University researchers are using cutting-edge techniques to grow a patient’s three-dimensional tumour outside the body.

In what is the ultimate form of personalised medicine, this “mini laboratory” can then be used as a quick and cost effective way to study tumour biology and determine the best treatment for an individual’s cancer.

Researchers from the Monash Biomedicine Discovery Institute (BDI) – launched today by Prime Minister the Hon. Malcolm Turnbull MP - have created an exceptional biobank of over 30 mini-gut organoids developed from tissue from colorectal cancer patients attending the Cabrini Hospital in Melbourne.

According to Associate Professor Helen Abud from the Monash BDI, who is leading the research team, the aim is to develop a biobank of more than 100 organoids that will be used to study the differences in how individual tumours grow and what can modify tumour expansion.

“These organoids have the same properties or traits that are seen in the patient tumour from which they are derived and can serve as an innovative platform for both cancer research in general and also for personalised cancer treatment," Associate Professor Abud said.

Associate Professor Abud, who is working with Associate Professor Paul McMurrick who leads the surgical team at Cabrini Hospital, said that the eventual aim of the research will be for surgeons to take a sample of tumour post-diagnosis. These will then be grown into 3D organoids which are effectively mini-models of the real tumour.

“These organoids can then be tested with an array of cancer therapies to determine patient sensitivities to drugs,” Associate Professor Abud said.

“This is either to determine those treatments that work fastest at getting rid of the tumour, or those that have little effect, thereby avoiding giving patients ineffective treatments. It is the ultimate in personalised medicine.”

The biobank – which Associate Professor Abud hopes to number over 100 organoids by next year, will also provide an ongoing living biobank of tissue that can be used to test and validate new drugs and targets and to model a cancer’s resistance to therapy.

The biobank will also be used to trial early detection methods, examine interactions with molecules and microbes and test new treatment strategies.

“By finding drug candidates using these organoids, we hope to screen and take a lot of the guesswork out of the early clinical trial phases,” Associate Professor Abud said.

Associate Professor McMurrick said that the ability for a patient’s tissue to be rapidly turned into a mini laboratory for finding the best drugs to be used clinically is a “game changer”.

“Some patients may be able to have a substantial aspect of their management changed by the results of organoid studies. We may be able to select patients who will respond to chemotherapy and radiation, versus those who need surgery alone,” Associate Professor McMurrick said.

Professor John Carroll, Director of the Monash BDI, explained the significance of the organoid research carried out in the Abud laboratory.

“This is exciting research with real life implications for patients, and is also being extended to study patients with prostate and breast cancer,” Professor Carroll said.

“The organoid research exemplifies what the Monash Biomedicine Discovery Institute is about: taking early discovery research, utilising an array of scientists with different skill sets, and taking the research all the way through to the clinic and assisting in patient care.”

A patient of Professor McMurrick’s, Melissa Monk, is a bowel cancer survivor, with a genetic predisposition to the disease. She said the research being done by Professors Abud and McMurrick “is crucial to those of us who have or had bowel cancer, and more importantly to those who might get it later on. If this research can help determine better, faster and safer treatments for this disease then that is an exceptional outcome,” Ms Monk said.