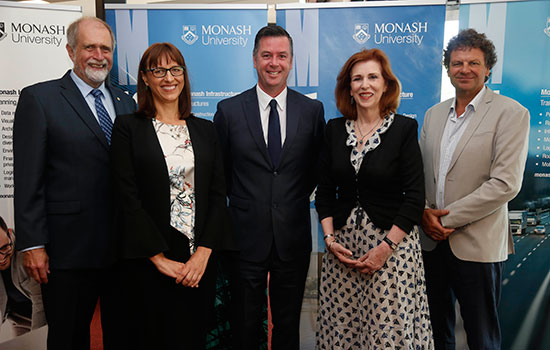 Australia’s capacity to deliver innovative solutions to critical global infrastructure problems such as water supply and maintenance of ageing rail will be boosted by the creation of Monash Infrastructure (MI) - a Monash University Institute officially launched today by the Minister for Industry and Employment the Hon Wade Noonan MP.

MI brings together Monash’s strong connections with industry and government with world leading infrastructure research and innovation. By developing new infrastructure solutions and increased efficiency and productivity from existing infrastructure, the Institute has the capacity to deliver billions in savings.

“This institute is a great example of how a world-class university like Monash, in collaboration with government, is finding solutions to some of the most critical infrastructure challenges on both a local and global scale,” he said.

Monash University President and Vice-Chancellor Professor Margaret Gardner AO said the institute was a superb demonstration of how the University was deepening its relationship with existing partners to create better outcomes for industry.

“Monash is committed to advancing excellence in cross-disciplinary research to help solve the great challenges of the age. Through Monash Infrastructure, the University is collaborating with industry and government partners to translate the benefits of our expertise and our research infrastructure  into real impact,” Professor Gardner said.

One of the many projects supported by Monash Infrastructure is the export of green water technologies to Southeast Asia. Researchers from Monash Infrastructure are developing and tailoring innovative solutions such as biofilters and rain gardens to solve problems including urban flooding, water pollution  and water shortages.

Melbourne Water has already installed over 10,000 rain gardens based on Monash designs, and the technology is also being exported to drought-prone Israel.

Director of Monash Infrastructure Professor Ana Deletic said the nature-based water treatment technologies developed at Monash could make a significant difference to the liveability of cities in which they are deployed.

“The knowledge we have built up over the last decade about how best to sustainably manage urban water is now ready to be adapted for export to the world.

“Monash has an extraordinary breadth and depth of infrastructure expertise across a wide range of disciplines. We’re developing strong relationships with industry and government in order to achieve tangible impacts through improvements in infrastructure around the world,” Professor  Deletic said.

Another initiative facilitated by Monash Infrastructure is new, industry-relevant research into state-of-the-art methods for railway infrastructure maintenance to deliver significantly reduced maintenance costs.  Six PhD students will investigate techniques such as using drones, vibro-acoustics  and instrumented rail cars to inspect and monitor rails, railway tunnels and bridges. The project is a partnership between Monash University, the Institute of Railway Technology and the Rail Manufacturing Cooperative Research Centre.

Monash Infrastructure follows the highly successful model of combining world-leading cross-disciplinary research expertise and research infrastructure within Monash University, with industry and government to address real world high impact needs. Other examples of this model include the Woodside Innovation  Centre which combines engineering expertise with the energy industry, and the Monash Biomedicine Discovery Institute which applies biomedical research excellence to the medical and pharmaceutical industries.