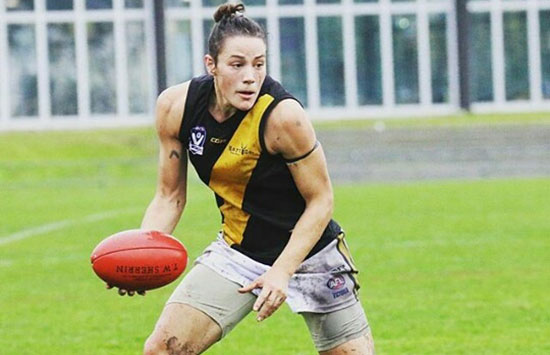 A PhD student from the Monash Biomedicine Discovery Institute has been selected to play for Carlton in the first ever NAB AFL Women’s League draft, and whose research could significantly benefit football players.

Kate Gillespie-Jones was one of 145 women selected in the historic draft yesterday afternoon, while her PhD study is focused on an area of concern in sport - traumatic brain injury caused by either car accident or sporting field blows to the head.

The study is using a novel laboratory method to investigate a common mechanism for brain damage. Ms Gillespie-Jones’ PhD supervisor, Professor Ramesh Rajan, said the research has shown promising results for exposing the mechanism and for developing a drug treatment that could be applied soon after injury.

Ms Gillespie-Jones said she hopes to keep up her PhD research while training, playing matches and travelling interstate for games, but may consider part-time research during the season.

“I’m pretty excited, especially because Carlton was the team I was hoping to go to,” Ms Gillespie-Jones said after the announcement. “I guess I didn’t even know there would be a women’s team like this until earlier this year – there didn’t seem to be the pathway.”

A keen player since her days in junior football as the only girl in boys’ teams, Ms Gillespie-Jones dropped out of the game at 14 when girls were excluded, but resumed playing at 20 when pathways for her to play opened up again.

She has since progressed through divisions of women’s football, winning league best and fairest awards in Division Two (2014) and Division One (2015) of the Victorian Women’s Football League, in which she played ruck with her local team, the Seaford Tigerettes. Ms Gillespie-Jones represented the Melbourne Demons in two AFL exhibition matches earlier this year.

Whoops of joy could be heard in the corridors of the Department of Physiology as Ms Gillespie-Jones was announced as the number 14 pick in the televised draw. The AFL received 1300 nominations for players for the eight teams.

Ms Gillespie-Jones will play for Carlton in the league’s two-month season early next year –with the blessing of several senior scientists at Monash who firmly believe in gender equity and opportunities for women.

The other teams in the new league are GWS Giants, Brisbane Lions, Carlton, Fremantle, Western Bulldogs, Collingwood, Adelaide, and Melbourne. Twenty-four more women will be chosen as “free-agent players.”