Monash researcher recognised for pioneering work in fight against superbugs 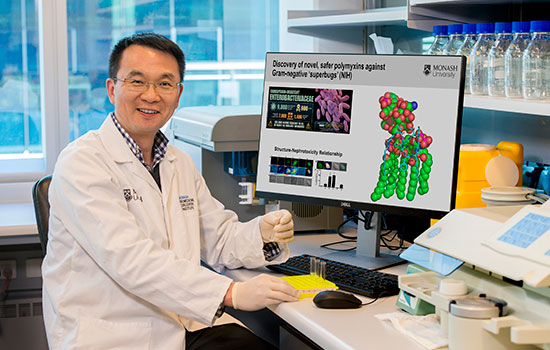 A Monash University researcher has been awarded the prestigious Jacques Miller Medal in recognition of his pioneering work into understanding a family of antibiotics that are the last resort against the worst of the worst bacterial superbugs.

Polymyxins, such as colistin and polymyxin B, are last defence antibiotics for particularly dangerous superbugs, including a family of bacteria known as carbapenem-resistant Enterobacteriaceae (CRE). In some instances, these superbugs kill up to 50 per cent of patients.

Earlier this year, researchers found a person in the United States carrying bacteria resistant to colistin, an alarming development that top USA public health officials say could mean “the end of the road” for antibiotics. It has already been detected in Europe and Asia, including Australia.

Professor Jian Li, from the Monash Biomedicine Discovery Institute and previously the Monash Institute of Pharmaceutical Sciences, was today announced as the recipient of the Australian Academy of Science’s Jacques Miller Medal for Experimental Biomedicine for his research into polymyxins. These are last defence antibiotics due to their ability to act on Gram-negative superbugs including Klebsiella pneumoniae, Acinetobacter baumannii, and Pseudomonas aeruginosa.

Professor Li, who has devoted more than 17 years to studying the polymyxin family of antibiotics, said he was honoured and humbled to receive the award.

“The Jacques Miller Medal is recognition for my group that has worked hard and smart in ‘re-developing’ polymyxins and the discovery of better polymyxins to cope with increasing resistance worldwide.

“Jian’s work is exactly what the Biomedicine Discovery Institute is about – taking early discovery research all the way to the clinic and into the hands of doctors. This award recognises a fantastic body of work that will benefit patients globally, at a time when we are running out of new and existing antibiotics,” Professor Carroll said.

The rise of Gram-negative superbugs resistant to widely used existing antibiotics has turned the spotlight back onto polymyxin antibiotics. One of the oldest and least understood of antibiotics, their use has waned since the 1970s due to their toxic effect on the kidneys (nephrotoxicity) and nervous system (neurotoxicity).

However, Professor Li and his group have adopted a systems approach to ensure the most effective use of polymyxin in patients.  This includes deciphering how the polymyxin antibiotics work to destroy bacteria and how resistance develops, how their toxicities are caused and how they can be prevented; as well as discovering novel, safer polymyxins.

Professor Li’s research group is responsible for the reporting of the majority of modern polymyxin pharmacology data. As a result, this has established the first scientifically-based dosing recommendations in critically-ill patients and changed clinical practice in hospitals worldwide.

Excitingly, his group has discovered novel compounds with superior efficacy and safety profiles to current polymyxins. These compounds are now being developed by an industry partner in the USA.

Professor Li is a highly cited researcher and is placed in the top one per cent of scholars internationally. His international standing is also demonstrated by six large R01 grants from the USA National Institutes of Health (NIH, totaling US$24.4m) since 2007. In 2014, two of Jian’s R01 grants were highlighted by US President Barack Obama as one of the six most outstanding examples of American-Australian innovation and cooperation in science. NIH funds are extremely competitive and the award of multiple R01 grants to an Australian scientist clearly demonstrates Professor Li’s international leadership in antimicrobial research.