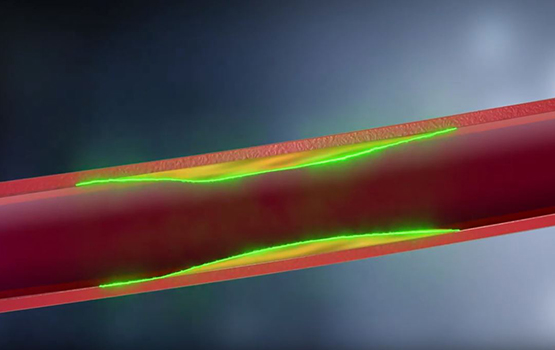 Monash University researchers are developing a new medical device to reduce the risk of complications following a common procedure to unblock clogged arteries.

Narrowing of the arteries, called atherosclerosis, is the most common cardiovascular disease and affects 100,000s of Australians and many millions around the world.

A current treatment, balloon angioplasty, involves inflating a small balloon in the affected area of the artery to increase blood flow. Coating the balloon with a drug that prevents renarrowing of the vessel has recently been added to the procedure.

However recent studies have found the drug used to coat the balloon, paclitaxel, may cause serious side-effects, including toxicity around the region of the balloon, up to two years after the procedure, prompting the US Food and Drug Administration to issue a medical device safety communication.

The Eastern Health Clinical School at Monash University is now developing an alternative treatment that uses a light-activated drug to coat the angioplasty balloon and reduce the risk of toxicity.

Associate Professor Anthony Dear said the device, called Lumi-Solve, ensured the drug was targeted to the site of the narrowed artery, and was only activated when exposed to UV light.

“Under the existing angioplasty procedure, when you open a balloon that’s coated with a drug a lot of it showers off and travels into the blood vessel down the leg, potentially causing reactions away from the intended area,” Associate Professor Dear  said.

“With our system, the drug is not active until the balloon is open and touching the vessel wall at the affected site and then exposed to light, potentially significantly reducing local and systemic toxicity.

“Tens of thousands of people undergo a balloon angioplasty each year, so the benefits of this new technique are potentially enormous.”

Associate Professor Dear said the procedure may also be safer than treating clogged arteries with stents, as they could cause ongoing health problems.

“As stents are permanent ‘foreign bodies’, they may cause blood clots, which requires patients to take life-long blood thinners,” Associate Professor Dear said.

“And because stents are not flexible they can fracture and rupture the artery wall in some areas of the body, particularly where they cross joints such as hips and knees.”

Associate Professor Dear said researchers had been working on the new device for several years – well before the FDA communication – and involved scientists from numerous institutes including Bio21 Institute - University of Melbourne, CSIRO and Baker IDI.

He said the study in the Lumi-Solve development program, which was aided by funded from Monash University and the NHMRC, was focussed on treating narrowing in leg arteries, however the new procedure could easily be applied to other areas of the body, including coronary and neck arteries.

They are now working on further development and evaluation of the device, with a view to application.