New evidence on the formation of the solar system 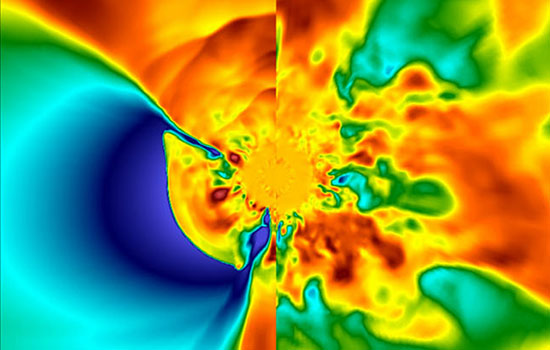 International research involving a Monash University scientist is using new computer models and evidence from meteorites to show that a low-mass supernova triggered the formation of our solar system.

The research is published in the most recent issue of leading scientific journal Nature Communications.

About 4.6 billion years ago, a cloud of gas and dust that eventually formed our solar system was disturbed.

The ensuing gravitational collapse formed the proto-Sun with a surrounding disc where the planets were born. A supernova—a star exploding at the end of its life-cycle—would have enough energy to induce the collapse of such a gas cloud.

“Before this model there was only inconclusive evidence to support this theory,” Monash School of Physics and Astronomy Professor, Alexander Heger, said.

The research team, led by University of Minnesota School of Physics and Astronomy Professor Yong-Zhong Qian, decided to focus on short-lived radioactive nuclei only present in the early solar system.

Due to their short lifetimes, these nuclei could only have come from the triggering supernova. Their abundances in the early solar system have been inferred from their decay products in meteorites.

As the debris from the formation of the solar system, meteorites are comparable to the leftover bricks and mortar in a construction site. They tell us what the solar system is made of, and in particular, what short-lived nuclei the triggering supernova provided.

“Identifying these ‘fingerprints’ of the final supernova is what we needed to help us understand how the formation of the solar system was initiated,” Professor Heger said.

“The fingerprints uniquely point to a low-mass supernova as the trigger.

“The findings in this paper have opened up a whole new direction of research focusing on low-mass supernovae,” he said.

In addition to explaining the abundance of Beryllium-10, this low-mass supernova model would also explain the short-lived nuclei Calcium-41, Palladium-107, and a few others found in meteorites.

Professor Qian said the group would like to examine the remaining mysteries surrounding short-lived nuclei found in meteorites. The research is funded by the US Department of Energy Office of Nuclear Physics.

To read the full paper, titled “Evidence from stable isotopes and Be-10 for solar system formation triggered by a low-mass supernova,” visit the Nature Communications website.