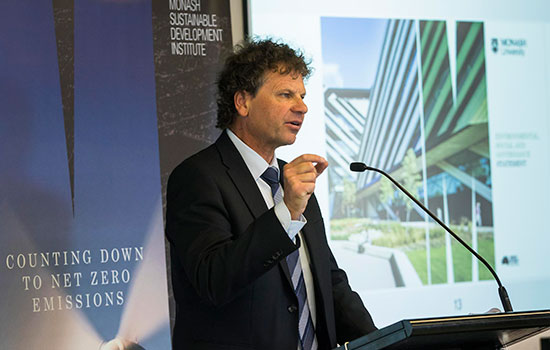 The new policy statement commits Monash, Australia’s largest and most global university to heightened levels of environmental and social sustainability.

Monash University has an annual operating revenue of more than $2 billion and generates $3.9 billion worth of economic activity each year. It has more than $3.75 billion in assets.

The Chancellor of Monash University, Simon McKeon AO said the commitments contained in the environmental, social and governance policy statement applied across the full scope of the University’s operations.

“The time for action to fight climate change is now. Our new policy statement will influence our research, teaching, investments and how we engage with our industry and government partners and the broad community. It will also impact on our campus facilities,” Mr McKeon said.

“Very few organisations in Australia have anywhere near Monash’s breadth of capability. The implementation of the new policy will see Monash use that capability to help combat the effects of global warming.

“We’ll seek to influence the transition to a net zero carbon economy by engaging with governments and businesses and utilising the technologies developed from Monash’s world class research programs.” Mr McKeon said.

“Monash will commit itself to achieve net zero emissions and we will announce that target date for its achievement early next year,” Professor Gardner said.

“Under the new policy announced today, the University will review every year the environmental, social and governance factors relating to our direct and indirect investment portfolios.

Monash has a student population of 70,000. It has campuses in Australia, China, India, Malaysia and a learning centre in Prato, Italy. The University was established in 1958 and has 333,000 alumni in 144 countries around the world.