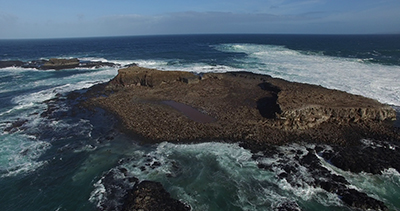 For the first time, researchers have used drone technology to monitor the size and well-being of an iconic seal colony near Phillip Island in Victoria.

Monash University Associate Professor Richard Reina, who conducted the trial in collaboration with Dr Rebecca McIntosh of Phillip Island Nature Parks, said it was a “huge success” and could transform the conservation management of the region’s seal population.

Associate Professor Reina, of Monash’s School of Biological Sciences said: “In one hour, we were able to achieve what typically takes over two days using traditional monitoring methods.”

“The drone camera flew across the turbulent water to the rugged terrain of Seal Rocks and took footage from a height of about 30 metres without disturbing the seals or birdlife.  The high resolution drone footage we shot will be used to record seal population numbers and to closely observe the condition of the seals, including any evidence that some have become entangled in fishing material,” Associate Professor Reina said.

Seal Rocks is part of Phillip Island Nature Parks - one of Victoria’s most loved and most visited tourist attractions.

Click here for the Seven TV News report on this seal conservation trial.