Professor Andrew Coats appointed Officer of the Order of Australia 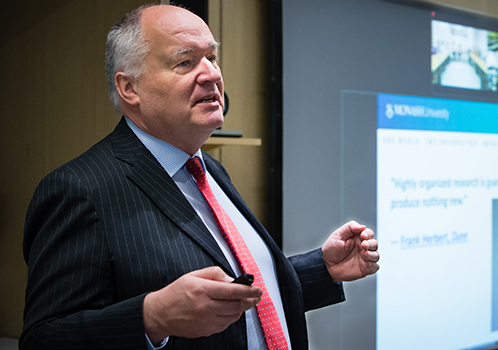 Professor Andrew Coats, the former Academic Vice-President of the Monash Warwick Alliance, has been appointed an Officer of the Order of Australia – one of the country’s highest honours.

A respected researcher and cardiologist, Professor Coats received the honour for "distinguished service to medical research and tertiary education in the field of cardiology, as an academic and author, and as a mentor and role model for young scientists".

Officers of the Order of Australia are recognised for eminent service of a high degree to Australia or to humanity at large.

Professor Coats’ high-profile career has been diverse and global.

Previously he worked at The University of Sydney, as Deputy Vice-Chancellor and Dean of the Faculty of Medicine, the Imperial College London, as Viscount Royston Professor of Cardiology, the University of Oxford and the UK's National Heart and Lung Institute.

A fully accredited physician and cardiologist in both the UK and Australia, Professor Coats has extensive experience in applied health. He has served as Chairman of the Australian Health Informatics Council and Clinical Director of Cardiology and Deputy Medical Director (Research and Development) of the Royal Brompton and Harefield NHS Foundation Trust in the UK.

Professor Coats has an MBA from the London Business School and more than 30 years of boardroom experience. He is a fellow of the Australian Institute of Company Directors and a member of the UK's Institute of Directors.