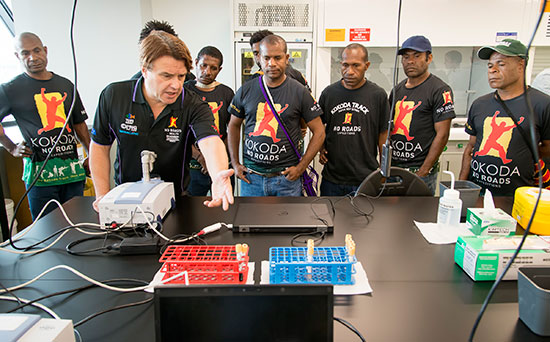 “Our battery powered device will ultimately provide people in remote communities with a cheap and easy way to detect malaria,” said research leader Associate Professor Wood, the Director of the Centre for Biospectroscopy.

“One of the main challenges in fighting malaria is that infected individuals can often present with no symptoms,” he said.

“Without advanced diagnostic equipment, this makes containing malaria near impossible.”

Nearly half of the world’s population is at risk of malaria, according to the World Health Organisation.

Associate Professor Wood’s new device will be sensitive enough to detect the malaria infection in those with no symptoms.

“This will finally allow remote communities to fight back against the malaria scourge,” Professor Wood said.

The research team will be assisted in the expedition by No Roads Expeditions Foundation (Aust) Ltd, an organisation who take clinical teams into the remote villages with the mission ‘to partner with aid agencies to deliver targeted health activities which benefit the people of Papua New Guinea’.

Monash researchers will work with a team of health care professionals and collect samples to test the spectrometer device.

The Monash team is hoping to collect 500 samples which they will then test for malaria. They will use the results to build a model for detecting malaria using their device.

“This allows “carriers" to continue infecting communities – but our device can detect asymptomatic cases as it's far more sensitive.”

“It is hoped that our device will be able to detect other diseases or efficiencies simultaneously in the future,” he said.