Significant investment for the performing arts at Monash University 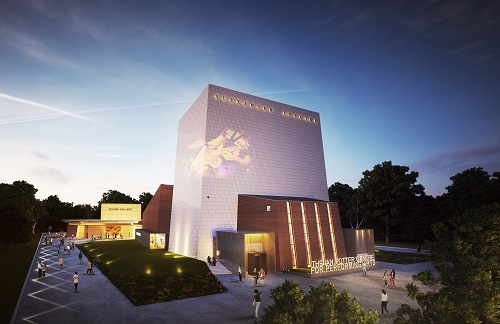 The cultural development of Melbourne's south-east will be further enhanced with a new $45 million performance centre at Monash University, it was announced today.

Victorian Government funding of $10 million and $5 million from The Ian Potter Foundation will enable this major performing arts project to be realised.

The performance centre is to be named The Ian Potter Centre for Performing Arts in recognition of the $5 million contribution to this project, and will comprise a revitalised 586-seat Alexander Theatre, a much loved foundation building, adjoining two new dynamic performance venues including a 130-seat Sound Gallery and 200-seat Jazz Club.

Collectively the venues will herald a new era of 21st century performing arts facilities at the Clayton campus which will further enhance Monash’s commitment to supporting growth in the performing arts in Melbourne’s south-east by providing state-of-the-art facilities to world class professional productions, students, community groups, schools and local residents.

Monash University acts as a beacon for community activity and engagement, attracting over 600,000 non-student visitors to University facilities last year, with the Alexander Theatre one of the drawcards. Designed by Peter Elliott Architecture and Urban Design, the refurbished Alexander Theatre is expected to open in early 2018 with the adjoining venues to follow.

Monash University President and Vice-Chancellor, Professor Margaret Gardner AO, thanked the Victorian Government and The Ian Potter Foundation for their generosity and ongoing commitment to arts and culture.

“The investment by the Victorian Government aids in transforming the Alexander Theatre into a versatile and truly contemporary performance space, strengthening its historical and cultural significance in the Greater Melbourne region,” Professor Gardner said.

“The Ian Potter Foundation has shown us such extraordinary support, not just for our current and ongoing projects, but for our vision and has allowed us to pursue our ambition with our new performing arts precinct.”

The Minister for Training and Skills the Hon Steve Herbert MLC said the redevelopment will ensure the campus will remain an exciting community destination for arts and cultural activity in Melbourne’s south-east.

“This redevelopment isn’t just a win for the staff and students of Monash University; it’s a win for the local community who will also have access to the state-of-the-art facilities.”

“Monash University’s arts facilities are vital to the cultural life of the University and to the community in this rapidly growing corridor of Melbourne. This redevelopment will completely revitalise the Monash arts precinct, extend the uses of its existing facilities, enhancing their appeal and creating a dynamic space for the University and the hundreds of community groups that rely on its venues. We commend the Victorian State Government for recognising the importance of the arts and music in their support of this initiative,” Mr Goode said.

Executive Director, Monash Academy of Performing Arts, Professor Paul Grabowsky AO, said he felt privileged to be part of the growth of the University’s cultural and performing arts offering.

“It’s fantastic to see our iconic performing arts venue progress to the next stage and further widen its offering across a diverse spectrum of artistic genres. We will continue to attract the highest calibre of performers to this exciting new space which will provide endless opportunities for our students, staff and the surrounding community into the future.”